The first thing I ever made with cauliflower was a quick and simple soup--healthy and delicious. This is a variation of that first soup I made, a little more fancy, with a lot of flavor. I found colored cauliflower on sale at Winco and couldn't decide between the purple or the orange, so I bought both! I didn't want to put them both in the soup, because that sounded like a grey gross disaster, so I cooked them in two ways and combined at the end. This recipe is my invention, though I've taken inspiration from a few places. 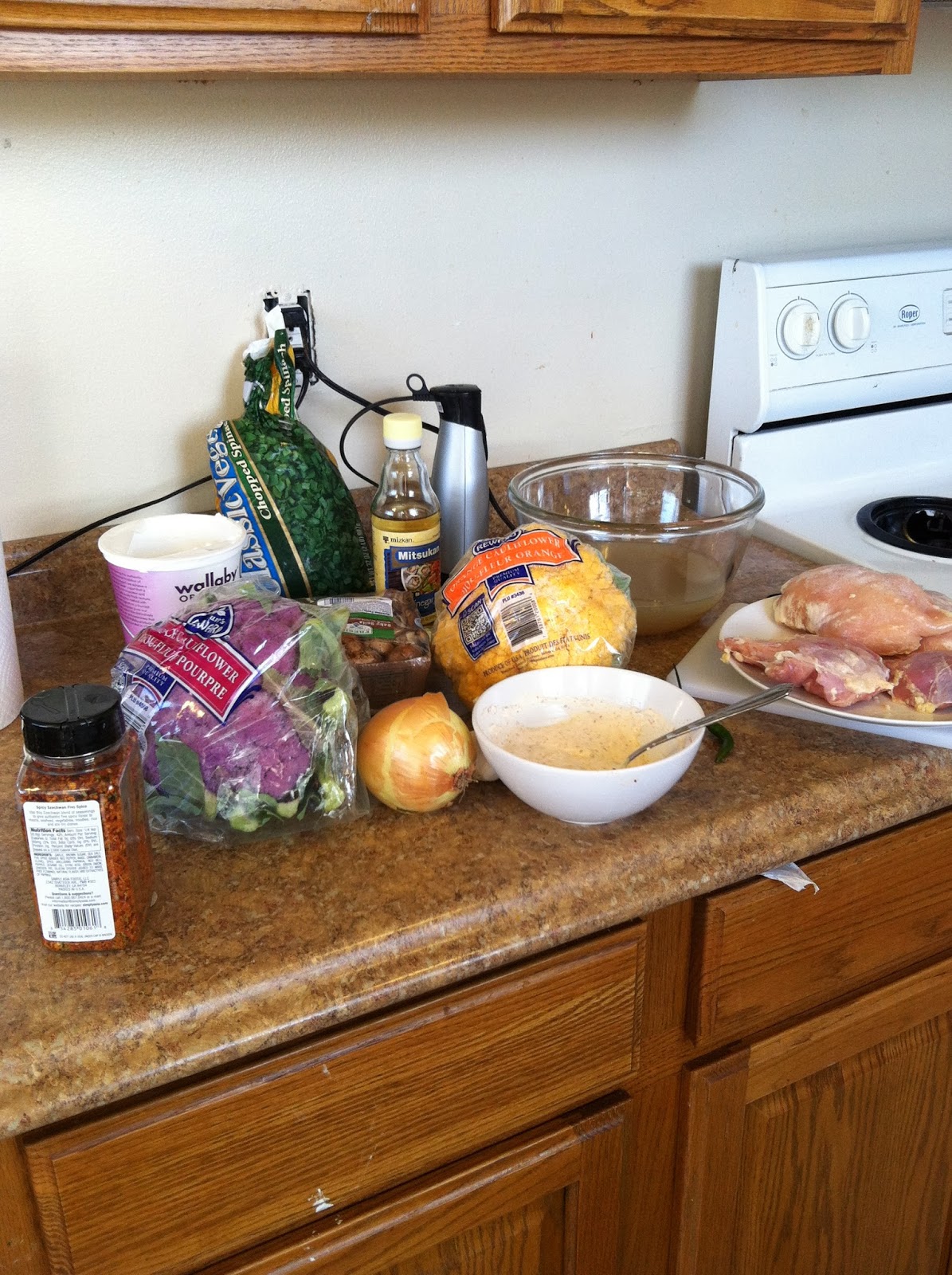 I added about 1 tablespoon of the five spice powder to the yogurt and a few splashes of the vinegar to thin it out. That was poured over the chicken and half of the mushrooms, and the purple cauliflower that I sliced into thick slices. That marinated for a while to work the flavors in. I saw this technique on an Alton Brown Good Eats episode, though I didn't follow his specific recipe or even the full technique, which used a cooling rack and water under it to steam the cauliflower.

After that marinated, I placed the purple cauliflower and half of the mushrooms and the chicken thighs on a cookie sheet greased and lined with tinfoil. I covered the pan and placed it in a preheated 375 degree oven for 10 minutes and then removed the foil to continue cooking. I also roasted a head of garlic

While that was cooking, I chopped up the onion , pepper, and mushrooms and sautéed them in a pan to soften and then added the chicken breast to the pan to cook. At the same time I heated up the chicken stock in a large pan with some of the Chinese 5 spice and once it came to a boil I added the orange cauliflower roughly chopped into somewhat even pieces. It will be pureed so it doesn't matter really how it looks, just so it cooks evenly. That cooked for about 8 minutes, or until tender but not mushy.

Once the cauliflower was cooked, I drained the broth into a container to keep for thinning the soup. Then I added in the chicken mixture, and the drained spinach and the head of roasted garlic. Then I used the immersion blender to puree it, adding in the broth a bit at a time so it was fully incorporated. It was pretty thick, so I ended up adding more water to get a good consistency and then letting it simmer for a while.

The purple cauliflower came out of the oven once it was soft with some crispy browning (I did turn them all over about midway in the process) The chicken took quite a bit longer, which I wasn't prepared for, but I've not a lot of experience cooking chicken thighs on the bone. The cauliflower and mushrooms were very good and I snacked on quite a bit! 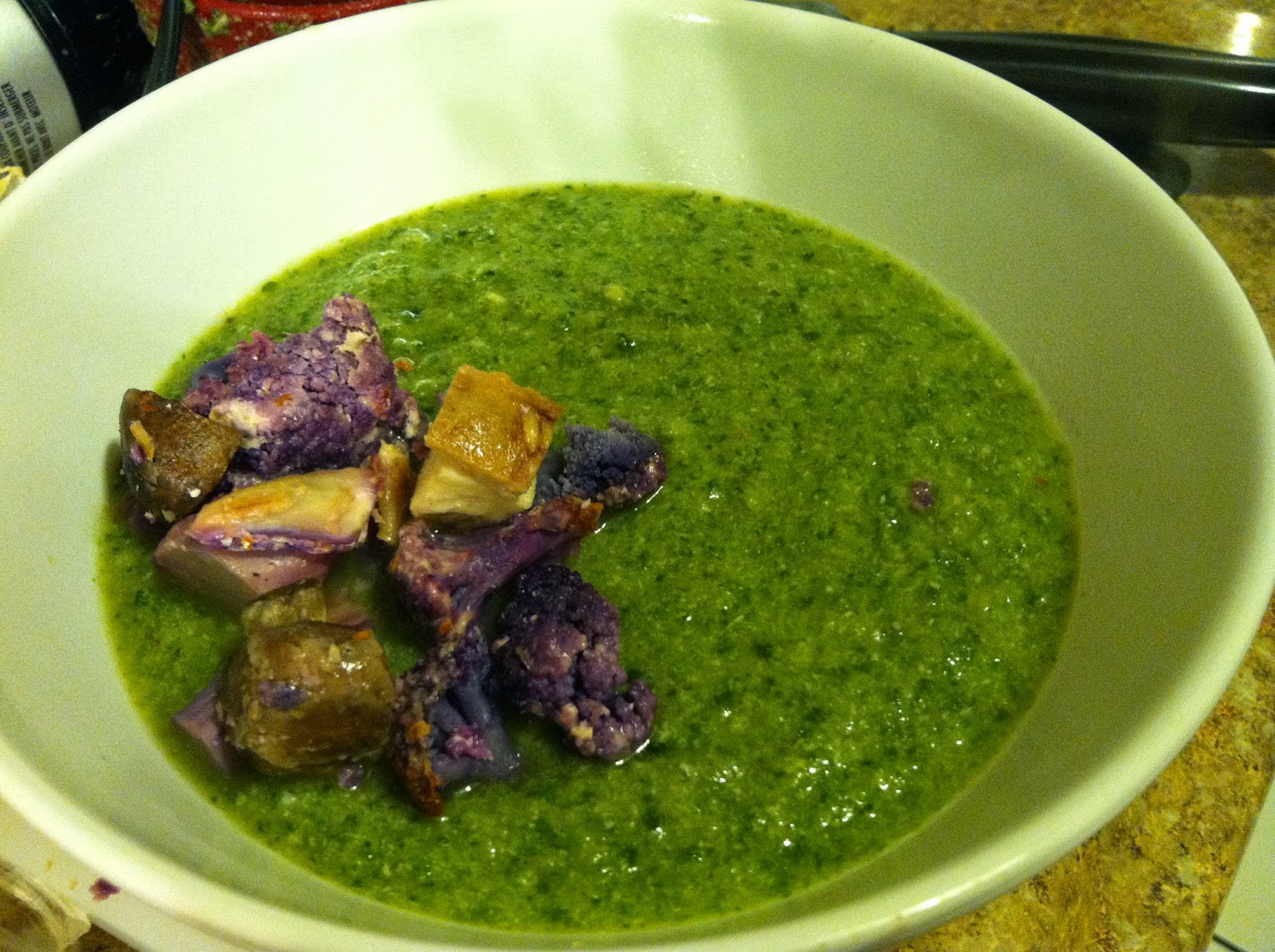 I served the soup on the bottom, topped with some of the cauliflower, mushrooms, and chicken thighs.

The Verdict: Spicy and delicious, with a rich and hearty taste and enough texture and heft to really fill you up. This is a cauliflower soup that I don't mind eating all week long. I have made this before many times, using squash instead of spinach or roasted red pepper or kale. But this is the first time I did the roasted cauliflower and homemade stock, it really elevated the dish to a new level of deliciousness. Either way this is my go to cauliflower soup recipe.