I went to graduate school in Ohio, and at that time did a lot more eating out than I do now. Mediterranean food was one of my favorites--pita, felafel, hummus, and kibbeh. So when I saw a recipe for a baked kibbeh that was pretty easy, I wanted to give it a try. The kibbeh I used to eat was a fried beef fritter, cinnamon scented and flavorful. This recipe is baked and uses lamb--though I added some beef as the ground lamb was over 8 dollars a pound. I also changed the recipe by making the caramelized onions in the slow cooker--which actually worked and only ended up with one night overwhelming onion scented apartment. 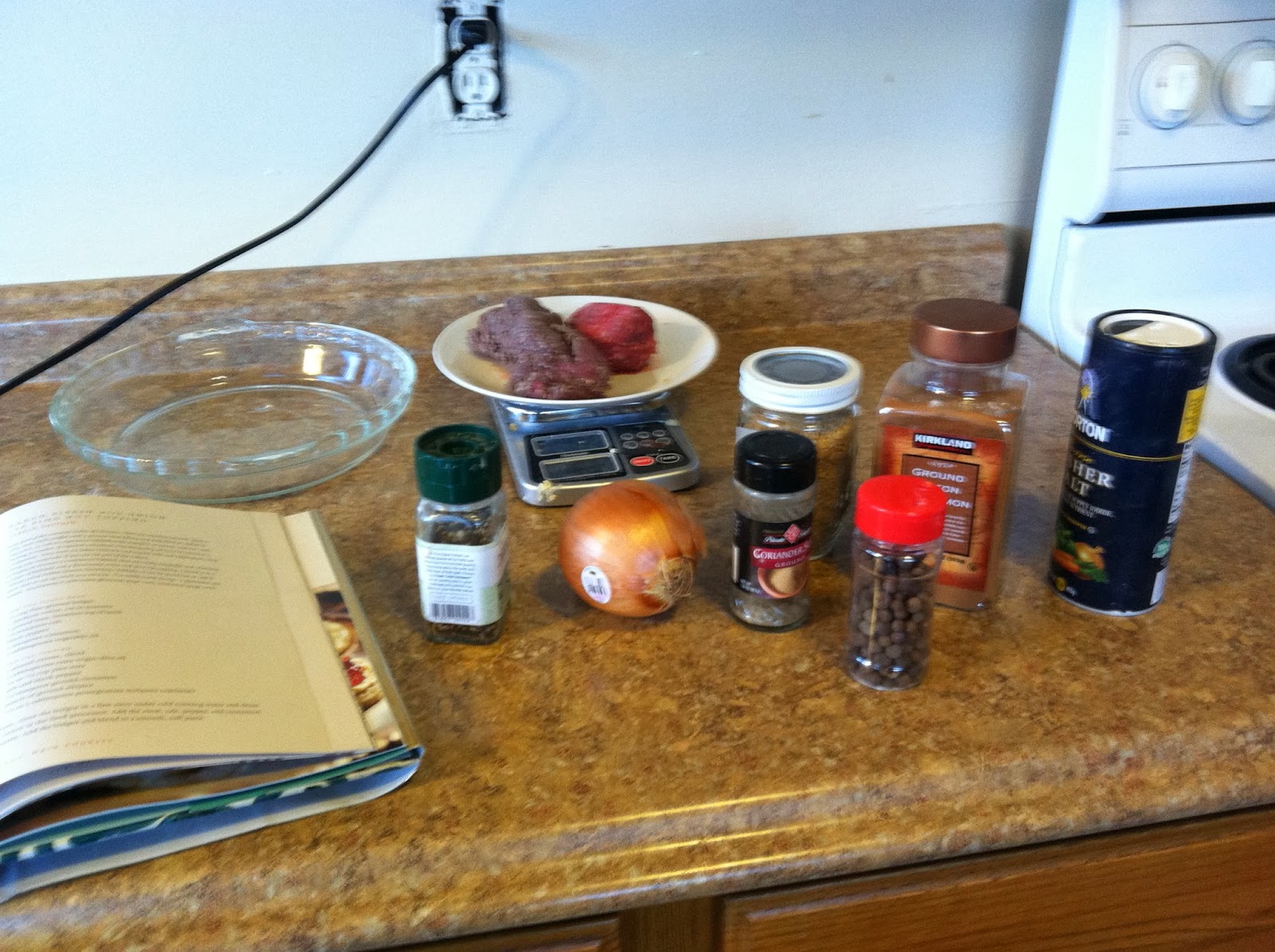 So this recipe has two parts, and I made them on two different days, bringing them together on a third day. Though it really isn't a complicated recipe, I just spread it out. One the first day I made the kibbeh base, the second I caramelized the onions, and the third I brought it all together.

First the bulgur needs to be rinsed and drained, and set aside to dry. The onion is peeled and then pureed, and added to the meat, salt, pepper, cinnamon, and a bit of allspice. I used my immersion blender to blend it all to a paste. Even though I used ground beef and ground lamb, this took some doing to break down the gristle. Once that was a paste, the bulgur is added and blended again.

This mixture is pressed into a baking dish--a large tart pan would work, or a 9x13 inch dish, which is what I used. Then it is scored. At this point I covered the pan and froze it until I was ready to cook.

So as I was contemplating making this dish, I was researching caramelized onions for tips and tricks, since I've never done it before. Somewhere on line I read that you could do it in a crock pot, and that it would be hands off and produce lovely caramelized onions with much less work. Well, of course I had to give it a try and since my crock pot is enormous I had to get a bunch of onions!

Monday night, around 10 pm when I was off of work, I chopped 5 lbs or so of onions and filled my crock pot to the brim. I pre-sprayed the pot with cooking spray before hand, but didn't add anything else. I cooked them on low all night long--and my apartment smelled SO strongly of onions I had to shut the bedroom door. In the morning I drained a bunch of the liquid and then I turned them down to warm when I went to work for another 9 hours. When I got home I cranked it to hot with the lid off to get any remaining liquid.

I didn't use all of the onions in this topping, though there is no shortage of things one can do with a lovely pot of caramelized onions! For the topping I toasted the pinenuts in a hot pan and then added a bunch of the onions, the cinnamon, salt and pepper, and a bit of allspice.

The kibbeh base goes in a 375 degree oven until it turns brown on top and is cooked through--depending on how thick it is in the pan will change how long it needs to cook. I overcooked mine, because I didn't check it quickly enough, so be careful. The kibbeh base is topped with the onion pinenut mixture. I served it with zucchini fritters and leftover spinach salad.

The Verdict: Fragrant and delicious--it isn't the same as what I had in Columbus, but it was still the same flavors. The cinnamon in the meat really worked, especially with the onions. If I did it again,I'd use more of the onions for the topping and increase the amount of topping.