I've written before about how much I enjoy portobella mushrooms, big or small, but I have to admit that besides the little white mushrooms, I've not eaten a lot of different types. So this weekend I ventured to an Asian market near my work, and found a package of oyster mushrooms for only 2$, I figured I should try them. I was able to find all of the ingredients, including the Chu Hou paste at the market, as well as lots of other veggies that I'll use in other dishes. As my goal is to learn to cook different dishes and different flavors, I wanted to follow the recipe exactly, but I ended up adjusting the seasoning at the end to enhance the taste. 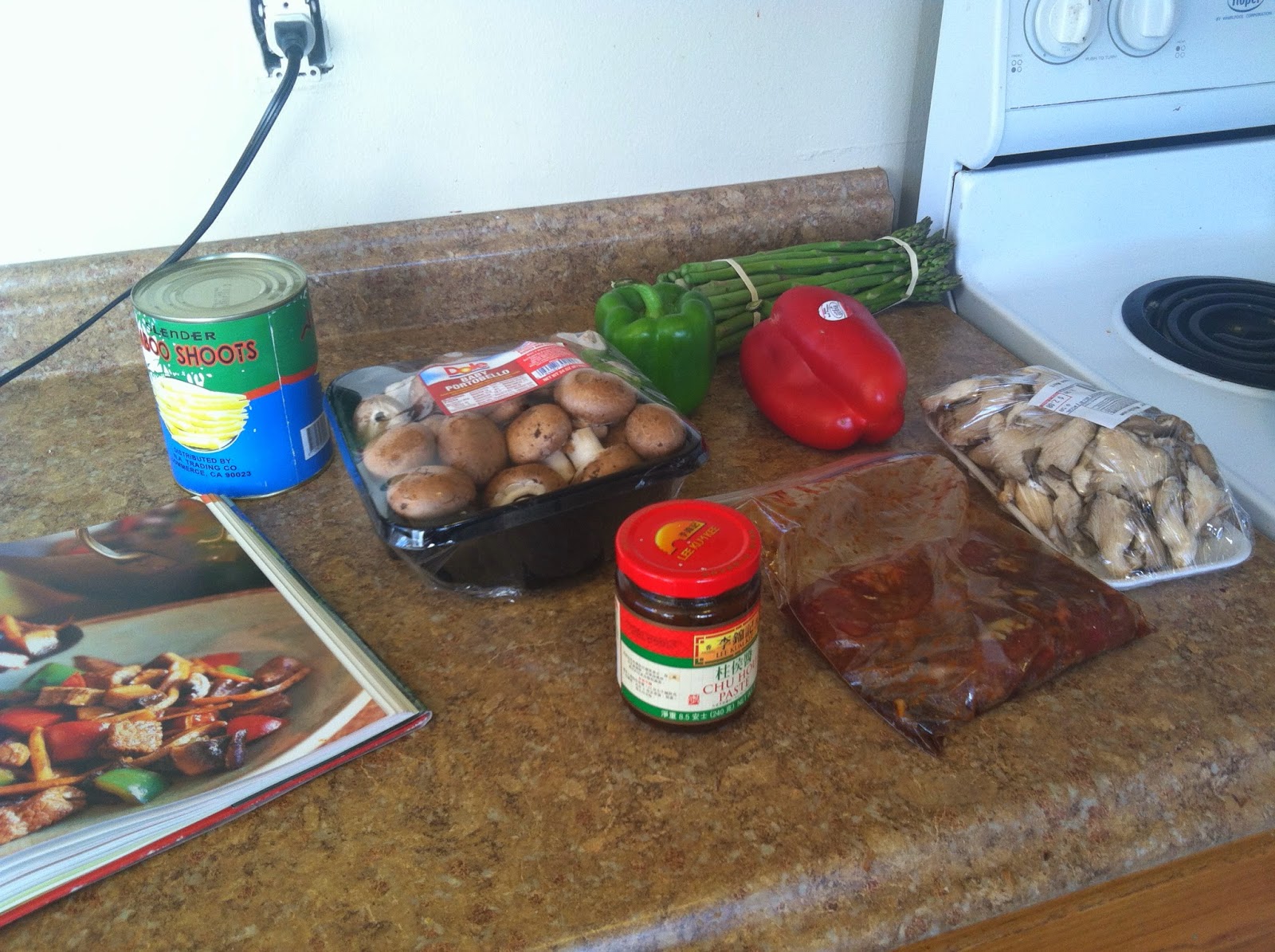 So I guess I lied when I said I followed the recipe exactly--or really I just kept the seasonings the same at first, and then added more at the end to get it where I wanted. A couple of hours before I cooked the steak, I put it in a plastic bag with a tablespoon of the chu hou paste, a dash of rice wine vinegar, soy sauce, and some crushed roasted garlic. I left that to marinate in the fridge for several hours.

This is a really quick stir fry--first the veggies are chopped. It said to pull the stems off of the mushrooms and just chop the cap, but I wasn't sure what part was which with the oyster mushrooms so I used the whole thing.The bamboo shoots were also new to me--I bought slender shoots, and then chopped them into quarters and then in half.

First the pan is heated up on high, then the steak is quickly seared, then taken out of the pan. Then the mushrooms, asparagus, and broth are added to the pot (if I did this again, I'd add some seasonings at this point). I used four of the homemade frozen stock cubes for the broth--makes it easy to have just a little without wasting the whole can. The lid is put on, covering the veggies and letting them steam until tender. Then the peppers and bamboo shoots are added and cooked very briefly.

After all the veggies are in the pan, the steak and cho hou paste are added to the pan and cooked until the steak is cooked through. At this point, I tasted again and found that it was generally underwhelming in seasoning. So I added a dash of soy sauce, rice wine vinegar, red pepper flakes, ginger, white pepper, and salt. I also served it with a good amount of siracha. Turns out I like it pretty spicy.

The Verdict: The meat was the most flavorful part of the whole dish due to the marinating, so if you make this, I'd add the chu hou, soy, and rice wine vinegar and garlic to the veggies during the initial cooking. It was also pretty soupy, so I may omit or reduce the broth, since you don't want to cook it off and over cook the veggies. The bamboo shoots added a nice texture, though they don't seem to have any particularly strong flavor. Both of the mushrooms were good--the oyster mushrooms were a little texturally different from the portobella mushrooms, but both were good.