A while ago I watched a video on this dish, and while I've never tried it before, and never cooked pulled pork, I really wanted to try this. Partially for those two reasons--I really enjoy trying something new and different, and this has two new things for me to try. Plus it is basically served as tacos at the end--which I know I like, so not a big risk. I hadn't gotten to it for a while, because of the fear of the meat--what cut should I use? Will it be fatty? Am I going to gain a gazillion pounds from this dish? Anyways, I found a package of pork picnic roasts on sale at the store on Friday and that is the cut for this dish--and 4$ for 3.5 lbs, it was a deal I couldn't resist! So here is my attempt--we'll have to see if it makes me gain a gazillion pounds! 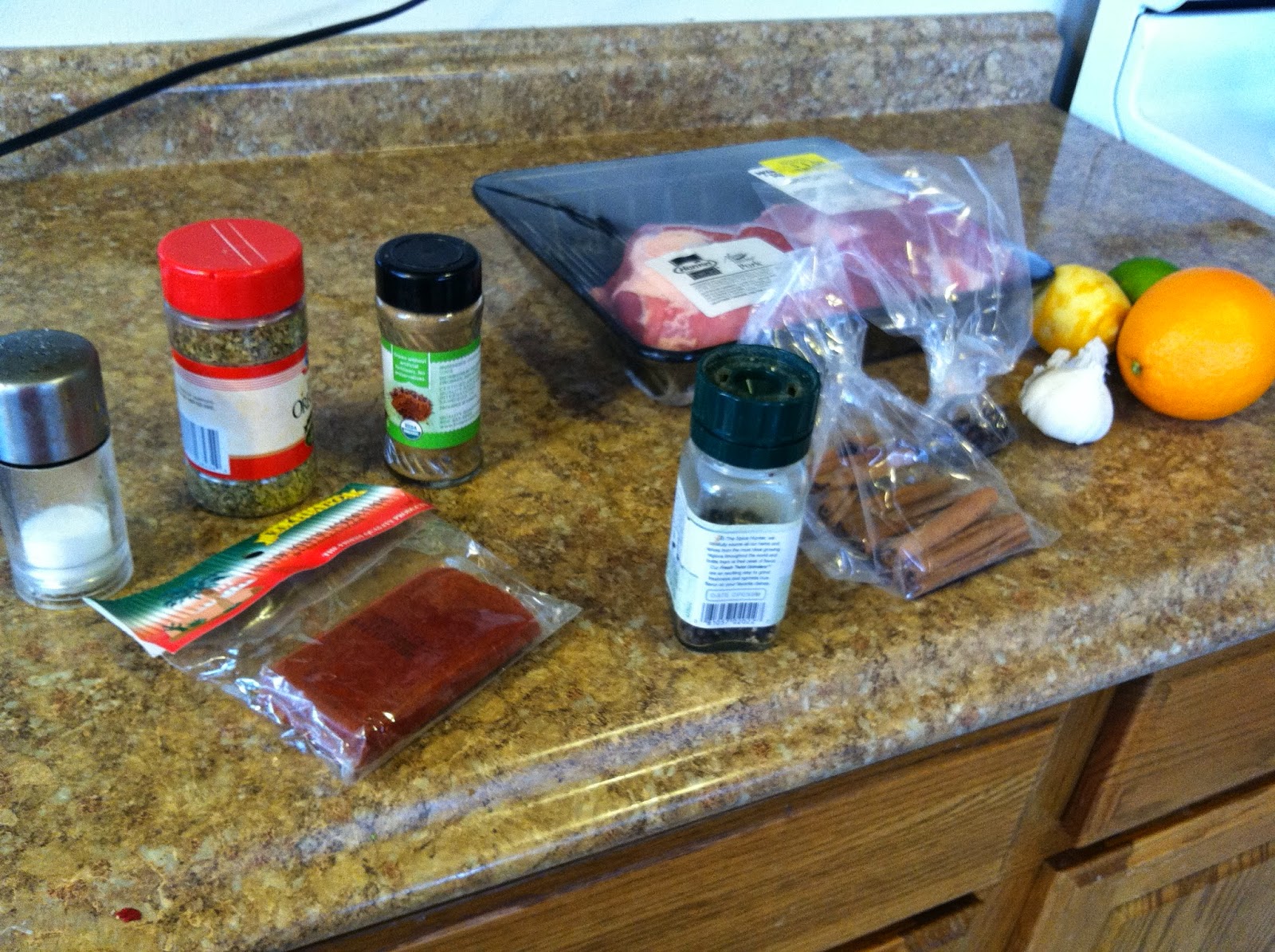 This is a recipe from Rick Bayless's Mexican Everyday with some variations, though I also drew on his longer recipe on-line.

This is actually pretty simple--if each step takes a while to work before moving to the next, it is much less work overall then I would have thought. First mix up the marinate--which is mostly just the achiote paste. I bought the paste a while ago, when I first started thinking about this dish, and it is an interesting flavor profile--it already has some spices in--I added more to get the flavor I wanted. It went into my mini blender with a couple of cloves of garlic, the lime zest, the lime, lemon, and orange juice, salt and pepper, some cinnamon, cloves, and cumin. This is blended smooth and poured over the roast.

It will stain your hands, so I put the roast (trimmed of obvious fat concentrations) in a gallon zip lock bag and then just poured the marinade in the bag over the roast, being careful not to get it on me. Then I can zip the top and really rub the marinate in. That goes in the fridge overnight or for up to 24 hours to really get the flavors in. My roast was actually two roasts in one package, so even more flavor can get into the meat.

When you are ready to cook the roast, toss half an onion roughly chopped in the bottom of your crock pot, then dump the roast on top and the marinade.The rest of the onion is sprinkled on top of the roast, and then I added half a cup of water to the bag to get the rest of the marinade out and poured that over the onions. I added a few pealed cloves of garlic to the sauce as well.

That cooks on high for about 6 hours, though I turned it over at about 4 hours and it was well on its way. I turned it down to low at that point for another three hours. Once it is done, I took the roasts out and put them on a plate with all the onions. Then I strained some fat off the top of the liquid, and reduced the rest to make a slightly thicker sauce. The meat is basically crumbling at this point, so I used my fingers to shred it and then poured the sauce over the pork.

The Verdict: This is a new flavor for me--sour and citrusy, a little sweet from the orange, but not spicy at all. It does go well with spicy, but isn't of itself very spicy. A little goes a long way in a taco shell, especially if you serve it with roasted veggies, as I did. Which will hopefully keep me from ballooning as I eat it all week!