Don't be Such a Chicken

The other day I ran out of Diet Coke, it was terrible! So on my way to water aerobics I stopped by the store to pick some up. In my caffeine-deprived, early morning fog, wearing ratty workout clothes over my swimsuit, I was approached by every single member of the store's management to say hi and chat--it was surreal. Anyway, as I searched blindly for the soda, I stumbled across a cooler full of whole chickens, for 99cents a pound. This has nothing to do with soda or swimming, but it seemed like a good deal, so I bought one. I've never cooked a whole chicken, nor even been around someone else cooking one--if you don't count the rotisserie at the grocery store. I did find the soda and get to aerobics, and now I'm trying to figure out this whole chicken thing!

Many of my cookbooks have recipes for roasted chicken, so many recipes it is overwhelming. Also they aren't that similar--different cooking times and temperatures, different preparations, and as many flavor profiles as one could expect. So of course, with too many to choose from I'm getting a little from one and a little from another. Mostly I'm following a recipe I found in a new cookbook I was putting away at the library, and found again online. It is a Coriander and Orange Chicken from Michael Symon. I watch him on the Chew and other food network shows, and so I can practically hear him read the directions. I may not be following them so well, but the flavors and technique are inspired by this. So the day before I planned on cooking this, I got out the chicken and got marinating. I love the idea of adding flavor, but I worry about the fact I can't taste it until after it has finished cooking. I zested the orange, grated the garlic, juiced the orange, minced the chipolte, and added the oil in with a good helping of salt and a fair amount of ground pepper. I put the coriander and the bay leaf in a frying pan and put it on medium heat, tossing frequently so they don't burn. When they were nice and fragrant, I added them to the rest of the marinade.

That done, I braced myself to tackle the chicken. It was not so bad--it only had a chicken neck inside, instead of all the gizzards I was expecting. I loosened some of the skin to get the seeds, garlic and zest up against the flesh. Then rubbed the whole bird, front, back, and inside with the liquid and placed the whole thing in a plastic bag where I can easily turn and rub the marinade into the bird. The whole thing went into the fridge, to be turned frequently, so the flavor can really get worked in. 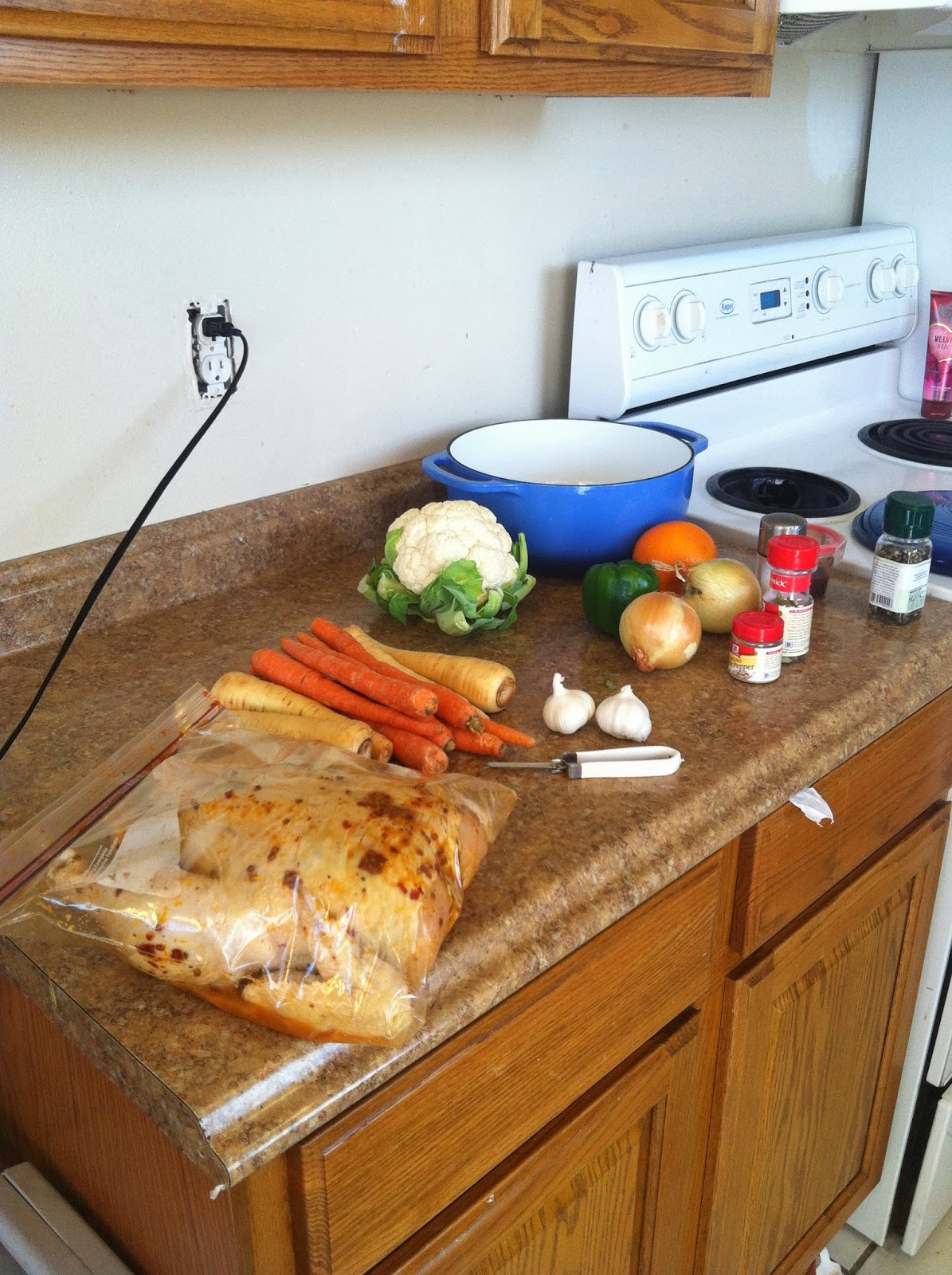 So I peeled and chopped the carrots, parsnips, onions, and garlic into pretty big chunks and tossed them with leftover marinade and put them in the bottom of my dutch oven. I put the chicken on top and put it in an oven heated to 425.

The recipe says for 45 minutes, but after half of that time the top was very dark. I turned the temp down to 375 and let it cook for an hour. It wasn't ready so I let it cook for another half hour and the thermometer said 165, on the breast so I took it out to rest. Well it wasn't done, so it went back in for another hour. After that it still wasn't done, but I was ready to eat the dog, so I cut off a slice and microwaved it with the veggies until it was good and done.

The Verdict:
This was a disappointment in that the chicken never cooked through-- though I was able to use all the chicken by taking it off the bird and cooking again. The actual meat was quite flavorful, though it was a little over cooked by the time I ate the last in a taco with a whole bunch of veggies. The veggies that cooked under the bird were lovely and tender and so flavorful with all that fat and marinade! The best thing on the whole dish was the veggies, and I've finally had a parsnip that was really worth eating. I will tackle the whole chicken again, and I will overcome! My plan next is to cook a whole chicken in a crock pot--it wont get crispy skin, but it should cook through!