This is one of those recipes that people grew up eating--though my American Century Cookbook said it only came to the United States in the 50s and 60s, it is very traditional dish in Latin America. Different countries, regions, and families have their own ways of serving it and their own twists on flavors they like to add. However, it is not a dish my family has ever made, and I had never even heard of it until I was looking through the Skinnytaste blog and found her recipes for it. I love the flavors of olives and capers, and this just sounded so delicious and hearty. The interesting this is that I have at least two cookbooks with recipes for this dish, but the skinnytaste one is what I went with, since I had everything and the others seemed more like sloppy joe recipes, with less developed flavors. 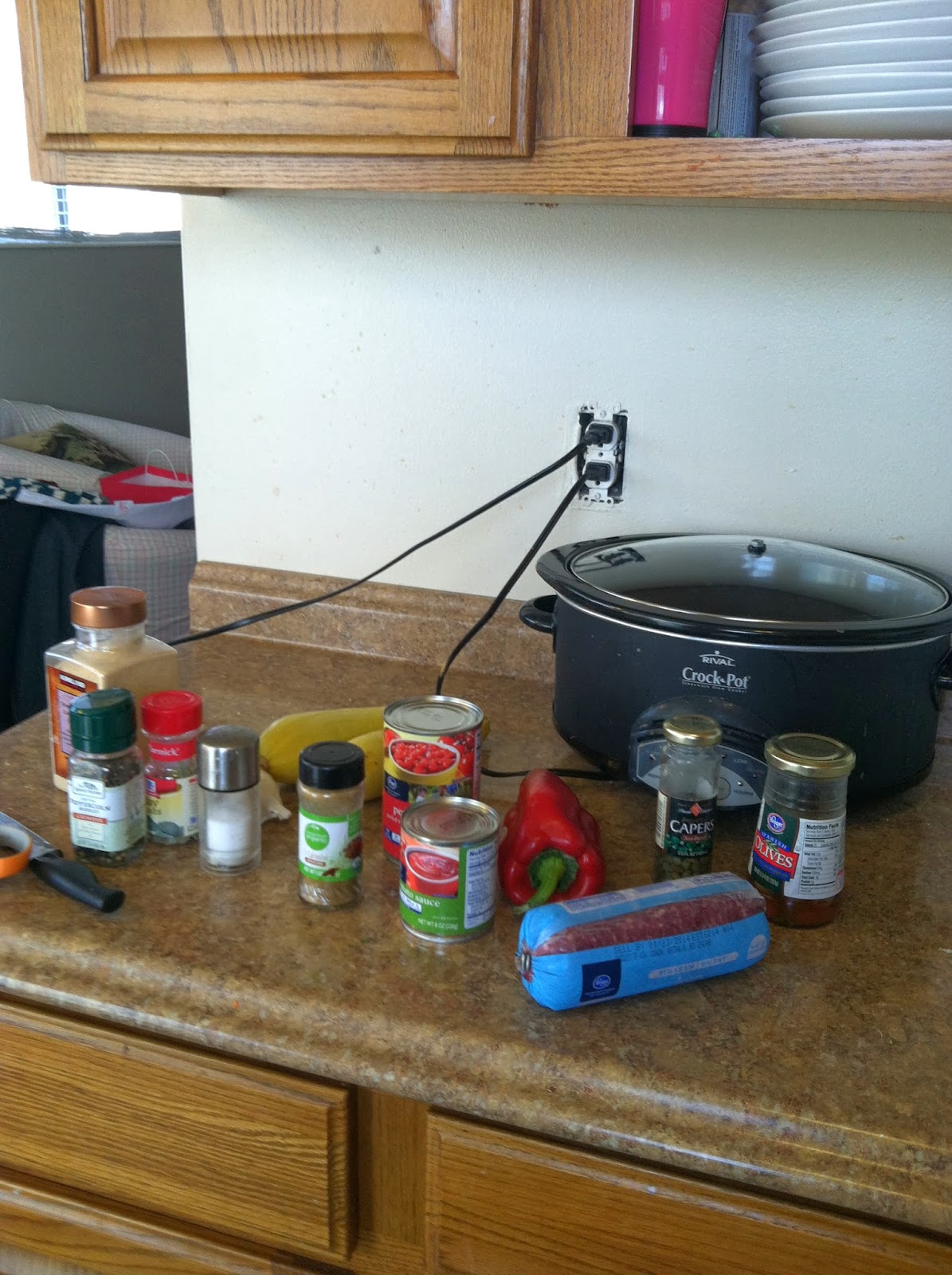 2 lbs 93% lean ground beef/ground turkey (I used half and half, because that is what I had in the freezer)
1 cup minced onion
1 diced red bell pepper (about a cup and a bit)
3 cloves garlic, (or two enormous cloves)
1 can diced tomatoes
8 oz can tomato sauce
1/4 cup olives, pimientos, capers, with brine
2 tsp ground cumin
1/4 tsp garlic powder
2 bay leaves
kosher salt and fresh pepper, to taste

Brown the ground meat, breaking up into small pieces as it cooks. Doing this brought back so many memories of growing up--pretty much every recipe I made as a kid involved a container of ground beef, some kind of canned sauce, and a carb. So even though this isn't a family tradition, the meat reminds me of trying to cook the half frozen meat. This meat was all the way defrosted, and while that cooked I minced the garlic, onion, and red pepper, which is probably three times the veggies I cooked with as a child. There was only one dish growing up that my mom ever made with fresh garlic, and she would swear her hands smelled like garlic all day after that. If the garlic she used was like this garlic, I can believe her. These were monster cloves--each one was the size of three regular cloves--so I just used two, and the smell was super strong.

Once the meat is browned, I drained it really well and added the chopped onions, peppers, and garlic and let that cook for a few minutes, until they had softened somewhat. This helps break down the veggie, so they release some of the flavor and brown. The mix goes into the crock pot along with the olives, capers, and pimentos--I also added some of the brine. Into the pot also goes a can of diced tomatoes, a can of tomato sauce, and all of the seasonings--the cumin, garlic powder, and the bay leaves. It didn't seem like there was enough liquid for the mix, so I added another can of tomato sauce and some broth. I added salt and pepper as well.

I cooked it on high for about four hours, with the lid off for the last little while to cook down. The original recipe calls for serving over rice, but I'm not a fan of starchy carbs for the sake of starchy carbs. So I served it with a variety of vegetables. It makes about 12 half cup servings--and I ate every single one over the course of a whole week. I'd thought to freeze some, but it is very versatile. I mixed a lot with chopped and defrosted and drained spinach, and served it stuffed in veggies, as a quesidilla, mixed with eggs, with squash, over cauliflower patties, with pop-overs, with cornbread, alone. Really there is no end of ways to eat it--I find it is really good mixed in with veggies, because it will flavor all of the vegetables and provide a larger serving size for the calorie content!

The Verdict: This is a great flavor profile for me--the capers, olives, and cumin are perfect with the ground meat and tomatoes. It is rich and savory, without being overwhelming, and not too fatty. It does make a lot of food, but I liked that I only had to cook once the whole week and could use it to make so many different kinds of dishes. This is absolutely something I'd make again, and can think of even more things this would be good with! Even though this isn't a recipe from my childhood, it has a lot of the flavors, and I think my parents would enjoy it as well!
Posted by Sarah at 7:00 AM