After I brought in the mystery cupcakes to work, I decided I needed to bring in some savory treats, since right now half of the staff have sworn off sugar. So when I found a recipe for "Rosemary Popovers, with Lemon Butter" in the Weight Watcher's 2005 annual recipe book, I was intrigued--a savory roll that didn't have baking soda or powder or yeast. Sounds easy enough, and I have most of the ingredients already, but I wasn't sure what a popover was supposed to be like. So I hit up the internet--and it turns out I do know the popover--as Yorkshire Pudding!

My grandmother was born and raised in Yorkshire before WWII and used to cook us Toad in the Hole, Roast Beef and Yorkshire pudding, and once even liver and onions! Sadly, none of her recipes have been passed down to me--she said the secret to Yorkshire Pudding was something that couldn't be taught, and couldn't be captured in a recipe. The secret was the scorched and seasoned pan, crusty and black with years of puddings and roasts. I'm not sure what happened to her pans--she passed away several years ago. But instead of trying to capture that Yorkshire spirit, I'm going to attempt some popovers!

Preheat the oven to 450 degrees, and get out the butter, milk, and eggs so they can get to room temperature. Put the pan in the oven to heat up for at least 5 minutes. Mix the butter and half of the lemon zest and set aside.

Once all of the ingredients are at room temperature put the milk, flour, egg, salt, and half of the zest in a large bowl and whisk until smooth. This is a lot like a crepe batter--very liquid. I went with orange zest, but these could be made with a huge variety of seasonings, sweet or savory. I let the batter rest for a little, about 5 minutes, though longer is better. In fact, like crepe batter, I bet the batter could be made in advanced and just whisked up and baked when needed. 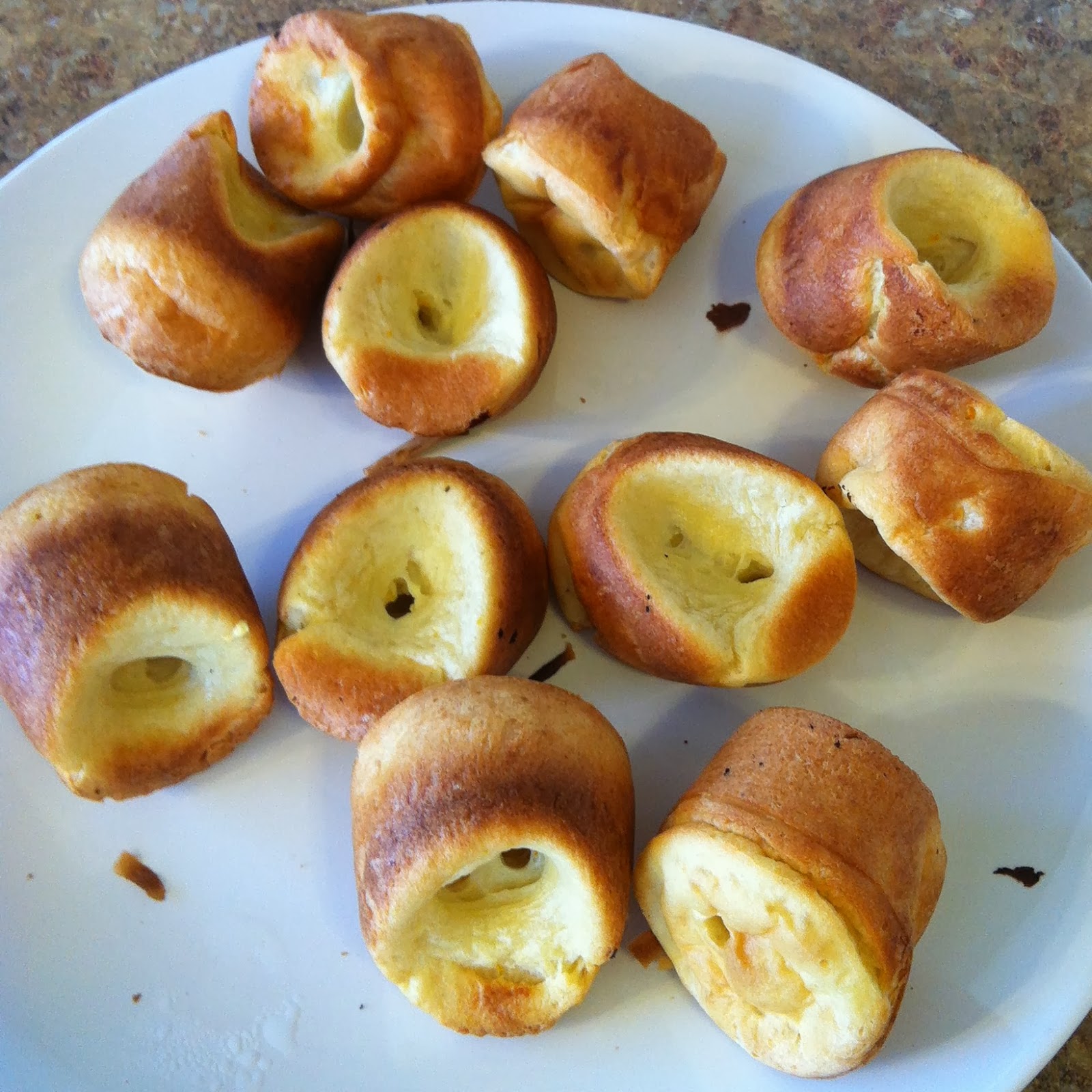 I pulled the heated pan out of the oven, sprayed it with cooking spray, and divided the batter between the
pans. They went into the oven for 15 minutes, and then the oven was lowered to 350 for another 15 minutes. They came out of the oven toasty and popped up--though not really over the top. I think if I had used real eggs, and not the substitute, they may have popped more. I pulled them out of the pans to cool--I'd read online to poke a hole in the bottom to let the steam out, but most had holes in the bottom already! 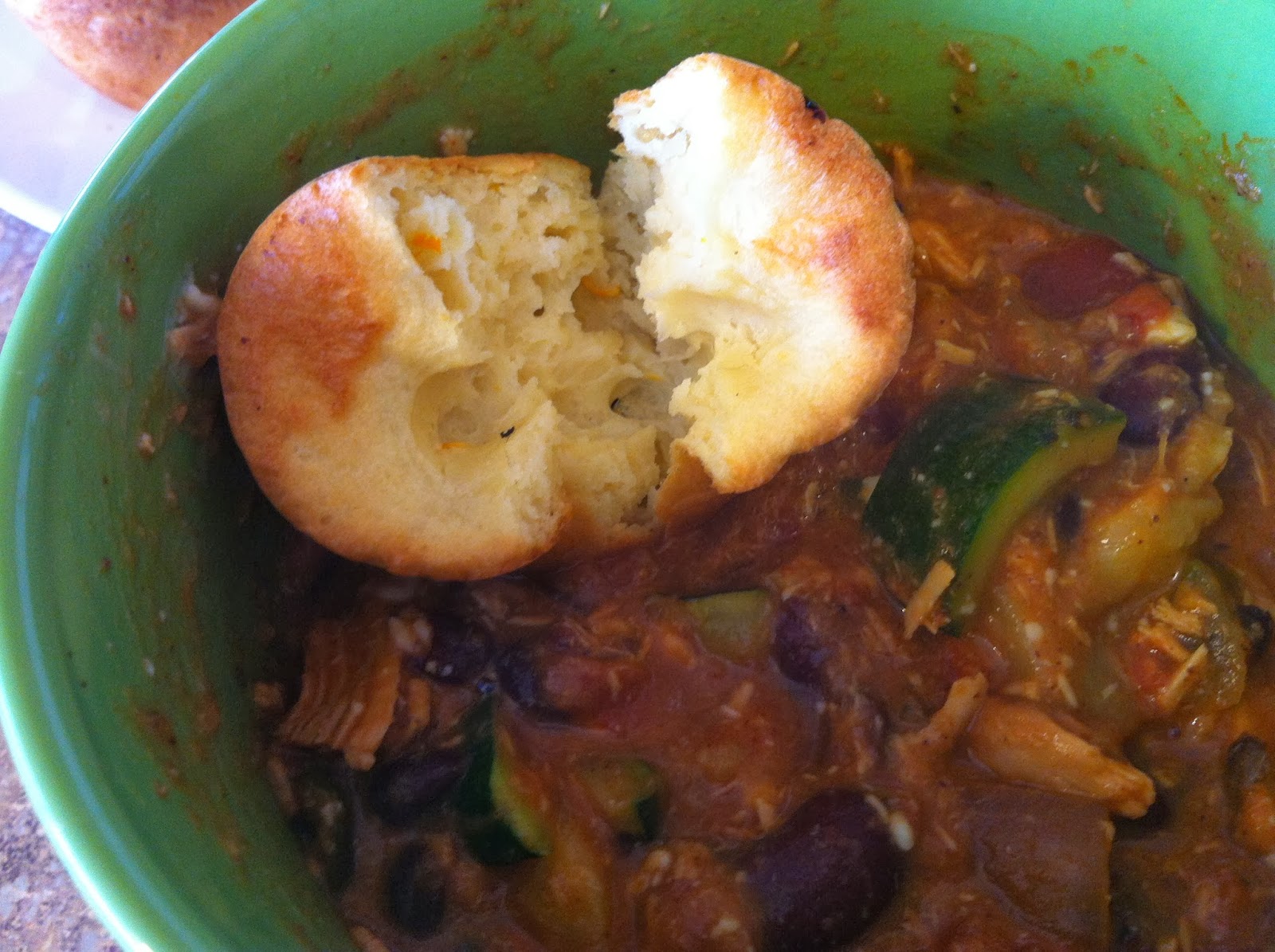 The Verdict: These were eggy and addictive--I meant to try one hot out of the oven and then eat them with leftover chili for lunch. But before I knew it I'd inhaled 4 along with my bowl of chili. They have just a faint hint of orange, and could be savory or sweet. The recipe called for using the orange butter with them, but they were just as good without or dipped in chili. I can see how they would be better fresh, hot out of the oven, served along with something to dip or smother them. Next time I will make up a batch of the batter and make a few at a time as I need them, so I can have them fresh for lunch and dinner!
Posted by Sarah at 6:30 AM