When I first got all my cookbooks, I dog eared the pages of all the recipes I thought I'd like to try (I am not ashamed of my dog ear habit, and most of these books were pre-dog eared by library patrons!). I marked this recipe in the Everyday Food Light cookbook, but didn't make it because I wasn't sure what pork to use. Plus, I've made a lot of recipes from this book, and thought I should diversify.

Today, however, I realized I had bought more broccoli before I'd even used what I already had--so I decided it was time to give this dish a try. The dish calls for pork tenderloin quartered lengthwise and sliced, but that is an expensive cut of meat where I live and is usually sold in bigger amounts than the 1 pound called for. So I decided to use some pork loin chops. They were already sliced thin, so I figured it would work. 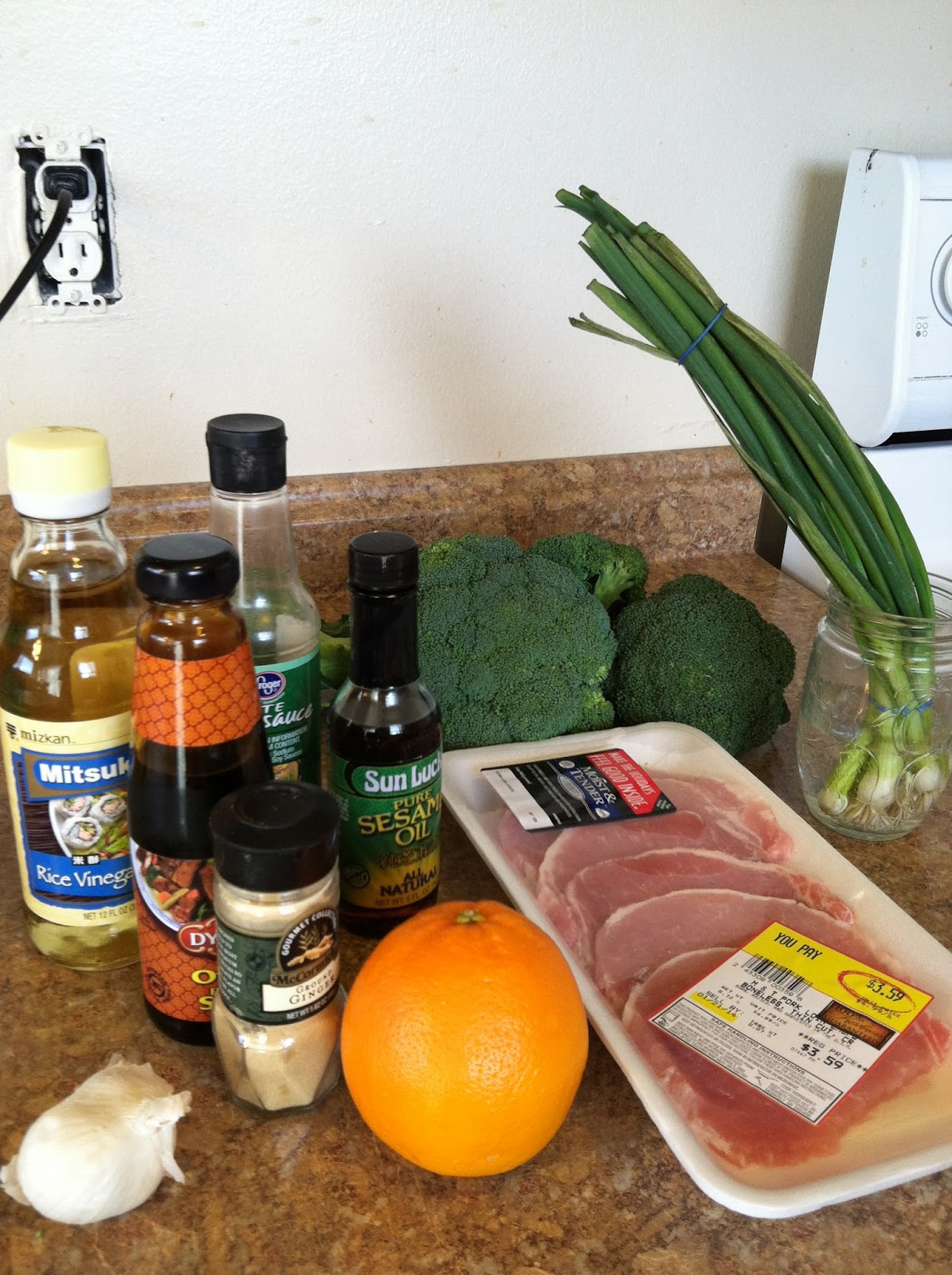 Since I cook on my days off, I tweaked the original recipe and turned the sauce into a marinade for the pork, letting it soak for several hours. I'm not sure that it made a big difference in this case, but I do like marinating things. So to make the sauce/marinade, I mix the zest and juice of one orange, the soy sauce, vinegar, sesame oil, oyster sauce, ginger, red pepper, and a good helping of ground pepper. I also grated the garlic and added it as well. I took the thin sliced chops and cut them into smaller strips, and placed them and the sauce in a plastic zip bag. It was more marinade than I'd usually use, but I'll cook it off as sauce later on for a whole lot of broccoli.

I stuck the bag in the fridge for a couple hours and made some goodies in the mean time. Around 5:30, I got out the broccoli, mushrooms, and scallions and chopped them. The broccoli was all chopped including the stems--which were peeled and then thinly sliced. The stem is actually one of my favorite parts in a stir fry, it really absorbs the sauce and is tender and flavorful. I usually don't spring for the extra money for the broccoli crowns because the stems are so good.

The scallions are divided, with the white parts going in the stir fry and the green parts reserved to top the finished dish. I added the mushrooms, even though the recipe didn't call for it, because I love mushrooms, and had a container of them that needed to be used up.

Once all the veggies were chopped, I sprayed the pan with cooking spray and heated it up on medium and quickly browned the pork on both sides. The pork was really thin, so it cooked all the way through almost immediately. I'm not sure why they cut it so thin--next time I'll buy thicker chops. I wonder if these might be used like the turkey cutlets for wrapped/rolled dishes. The directions called for browning on both sides, and resting while the veggies cook, and then a final cook together.

So after all the pork had been browned/cooked, I put the onion and mushrooms in the pot and let them cook off a little until the onions were soft.  Then all the broccoli is added. I poured 1/4 a cup of the marinade/sauce and a couple tablespoons of water to the pan, and covered and cooked until the broccoli was crisp/tender, stirring occasionally. A lot of the liquid cooked off during this time, steaming the broccoli.

The pre-browned pork is added to the pan, once the broccoli is cooked. I also added the cornstarch to the remaining sauce/marinade, squishing it around the bag to get it mixed in, and then pouring it and all meat juices on the pan. I let that cook until the sauce started to thicken and all the pork had cooked through. The final step is to top with the freshly chopped green scallion tops.

The Verdict: Flavorful and fresh, this is a quick and easy dish (even though I made it more complicated than it needed to be). I like a fair amount of strong flavors in my dishes, so I love the complex layers of flavor--the red pepper, ginger, orange, fish sauce, sesame oil, garlic--and the fresh scallions really give it a fresh edge. It is perfect for me because the leftovers make wonderful lunches for the next day. This made enough for 3 generous portions, but if served with rice or noodles it would easily serve 4 or 5. But I don't feel like rice is necessary to enjoy this.