So while contemplating my first bread attempt, with its long and relatively specific and complicated directions, I pulled another book (this one still in the library's collection) called Artisan Breads Every Day to compare the techniques. This is another long process with low kneading requirements. I don't have a stand mixer and my sister's is broken, so I wanted to give this a try to see how it compares. Partially because I wanted to make a whole wheat bread, and this book had one I had all the ingredients for in my house (I didn't have to borrow any ingredients from my sister, but I did anyways. It is good that she doesn't read this blog!) 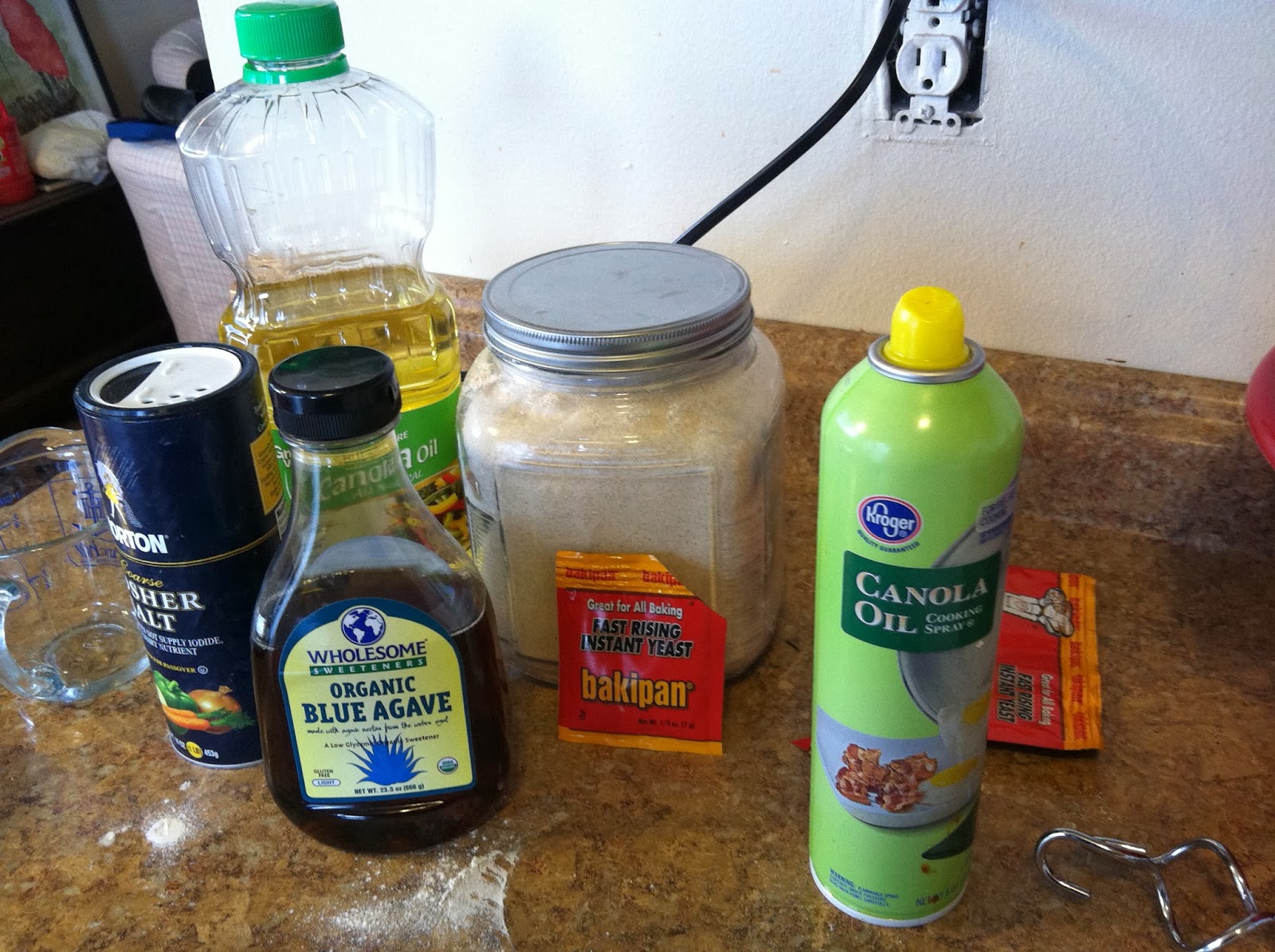 This makes two loaves, but I'm already making another loaf, so I divided it in half. Hopefully that doesn't screw up the bread.

The dry ingredients are added together--including the sugar, but not the yeast (I may have done that at first and had to redo this!), and mixed to combine. The yeast is combined with the lukewarm water and the agave nectar--stirred until they are combined and the yeast has dissolved. Then the oil is added and whisked. The wet mixture is then added to the dry ingredients until the flour is all moistened.

At this point the dough is set aside for the flour to fully absorb the moisture, 5 minutes--I may have lost track of time, but came back and got on. I don't have a stand mixer, but I have a hand one with a dough hook, so I employed it for this next step. The dough is supposed to be stirred for 4 minutes at medium low speed increasing to medium high for the last 30 seconds--my dough was pretty dry so I added two tablespoons of water one at a time while I stirred. This was pretty hard for me--even with the mixer it was a lot of work.

After the dough was stirred enough I dumped it on a lightly floured surface and begun the fold and stretch part. Basically you pull from the bottom of the ball towards yourself and then wrap around to the other side, do that from each side, wrapping it. Then it goes into an oiled bowl and sits for 10 minutes at room temperature and then the same dump, pull, stretch, and wrap. This is repeated 3 additional times with 10 minutes in between.

After the final time, it goes into an oiled bowl, is covered well with plastic wrap, and goes into the fridge at least overnight, but for as much as 4 days. It does a lot of raising in the fridge--not only was it visibly bigger, but big bubbles appeared on the top. I pulled it out around 1 pm, after about 20 or so hours later.

Normally it would be divided into two loaves, but I'd split the recipe in half. So I dumped it on a floured surface and formed a loaf by pulling the edges towards the center. The book had some nice illustrations to demonstrate how to do this. I'm not sure I did it right but it is supposed to be a homestyle hearth loaf, not a fancy shaped loaf. I placed it on a sheet of parchment paper with cornmeal on bottom on top of an inverted sheet pan. It is covered with an oiled plastic sheet and let rise for about 3 hours until it had doubled or more. I kind of lost track of time, so I'm not sure how long it was, but you can see how much bigger it is.

The oven requires a specific set up for this type of bread--different from the last one, but a similar principle. The idea is to create a heated place to put the bread, rather than just put the pan in a preheated oven. So this is trying to recreate your stone hearth of yore or brick oven. I didn't have any kind of pizza stone, tile, or stone anything. But my sister had this heavy duty stoneware casserole that I borrowed--I'm dog sitting and she told me to make myself at home so I did. It goes into a 500 degree oven, along with a sheet pan. The two racks are moved to the bottom two slots, and pre-heat for at least 40 minutes. They need to be really hot to create the right environment to cook the bread.

About 15 minutes before it needs to cook, I took off the plastic and cut two parallel cuts in the bread dough and let it relax.  Then it is transferred into the prepared oven. This was pretty tricky with the casserole as opposed to a pizza stone or other flat stone. So the loaf got distorted, and since it was so hot it really started to bake right away. I poured a cup of very hot water into the sheet pan below, and reduced the oven's temperature to 425 and cooked for 15 minutes and then turned the pan and cooked for another 15 minutes. It had browned very well so I pulled it out and let it rest for 15 minutes before tearing into it.

The Verdict: This is a nice soft intensely wheaty bread. The wheat is perhaps a little bitter--it could use more agave or honey or sugar to balance out the amount of wheat. That said, it has a really nice crumb, with a lovely texture. I'm actually surprised at how soft and moist it is considering it isn't enriched. The crust isn't too hard, but goes well with the soft interior. I will try this again, increasing the sugar and maybe cutting the whole wheat with some white flour to moderate the taste--or adding some flavor counterpoint.