So I own one book on baking bread, but checked out two others from the library to explore other methods besides the long rise one. Kneadlessly Simple is the one I own, and I've baked from Artisan Bread Every Day from the library. Now I'm trying my hand at the Artisan Bread in Five Minutes a Day method. This is actually my second attempt at this recipe. The first was foiled by incorrect storage and inattention in the fridge. While this is my fourth batch of bread since I started baking, it is actually my very first attempt at making a sandwich loaf. All of the other bread I've baked has been in rustic crusty loaves, which is ironic because I actually prefer softer sandwich style bread. I just didn't have a loaf pan--until now! 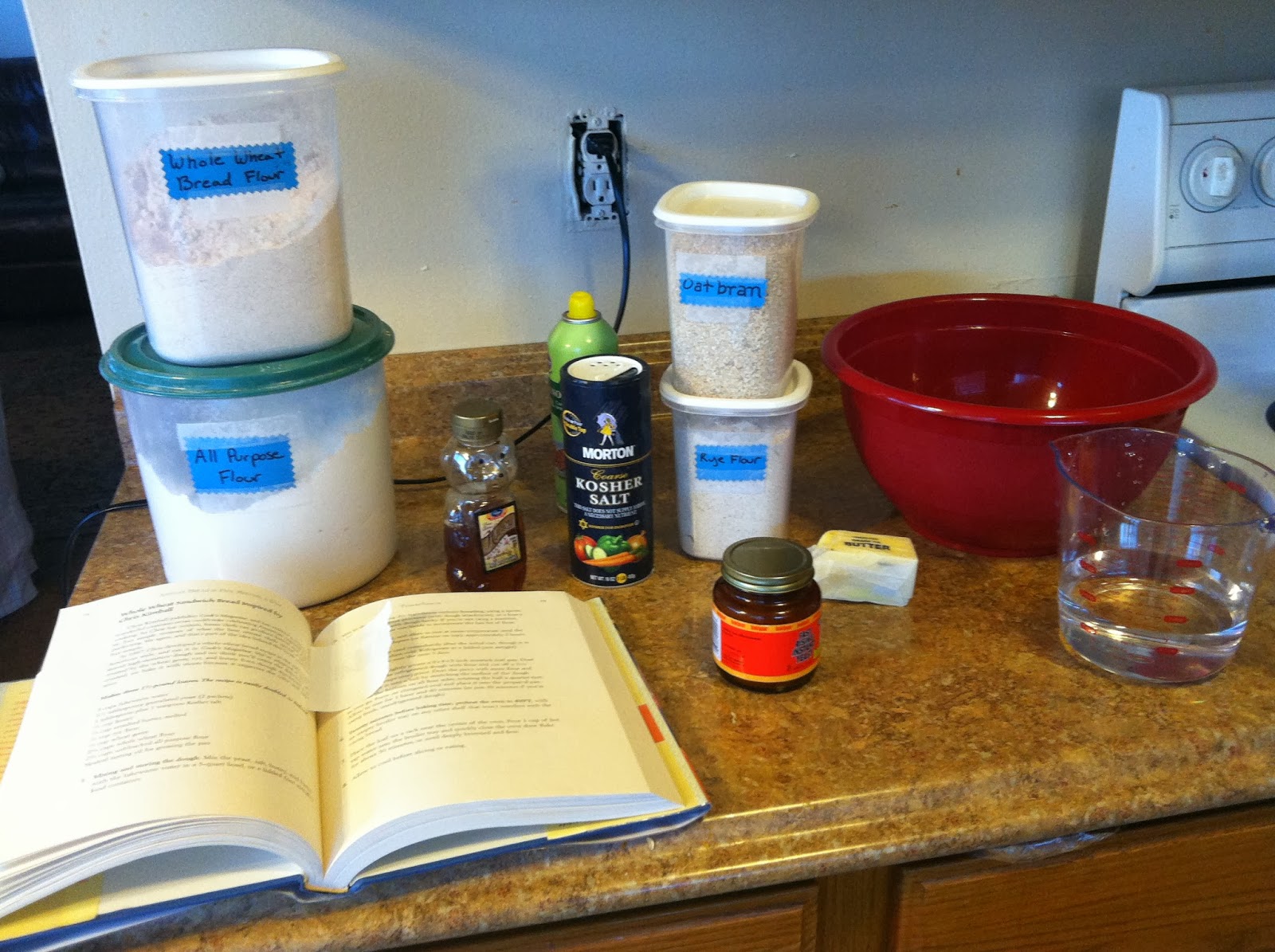 This recipe makes enough for 3 loaves of bread, so you really need to start with a large bowl. And the bowl needs to have a non-airtight lid. I used my largest lidded bowl, and it was not quite large enough. Like all of the non-knead methods of bread baking I've tried, this is pretty simple. Lukewarm water, yeast, honey, and the melted butter are mixed together, and then the dry ingredients are added and stirred just until all the flour is incorporated. It is a pretty wet dough, so pretty easy to stir together with just a spoon. No need to get out a mixer or anything fancy.

Next the dough is set out for 2 hours until it rises and collapses--my dough reached the top of the bowl and met the lid and could go no further. Though that was a pretty impressive rise! Once this is done, supposedly the dough can go in the fridge to be portioned out and baked over the next five days. This is where I messed up the first time--the dough is supposed to be covered, but not airtight, and it got a really unpleasant crust on the top of the dough before I could bake it so I threw the first batch out.

For this second round, I made a loaf right away after this first rise. I cut off about a third of the dough and stretched the surface around to make a loaf shape and then set it in a greased loaf pan to rest and rise some more for about 45 minutes. The directions say that once the dough is refrigerated it will need an hour and forty minutes or so to rise.

It did increase in size during the second rise, but not as much as I would have hoped. It is kind of a small loaf.

I put it in the oven that had been preheated to 400 degrees, with a sheet pan underneath. A cup of hot water goes into the sheet pan and it is supposed to bake for about 50 minutes. I did not like how dark it was getting when I checked on it at 35 minutes, but baked it for another 10 minutes and then pulled it. I think the steam was unnecessary, as I like a soft crust, and I think that is what gave it the dark top.

The Verdict: I didn't expect to be impressed by this loaf, but now it is pretty much all I want to eat. It is SO good, an amazing texture, a complicated flavor that isn't too bitter or boring. As I've said, I could live off of bread alone, and this is probably the one I'd choose from the bread I've made so far. It slices nicely, and is good plain, with my eggs, or even as a sandwich!