I'll admit to being a breadlover--while I don't pair every main course with a carb, I just love a good bread, and so does my family. We used to joke that we could eat our fill out of the bread bowl at family dinners and not even need an entree. But I can't say that we ate a lot of homemade bread growing up--besides the good old bread machine. I have to say I didn't love the texture of the crust on it, though it never stopped me from eating it. So in my quest to learn to cook, baking bread seemed like a skill I would naturally love to develop. I even had a book in my collection that made it sound easy, so I'm giving it a try.

The book I'm baking from is called Kneadlessly Simple and promises Fabulous, Fuss-Free, no-knead breads. While it says simple and easy, this is no quick recipe where you toss a few things together and have results right away. Rather it is putting things together and letting time do its business. Lots of hurry up and wait. 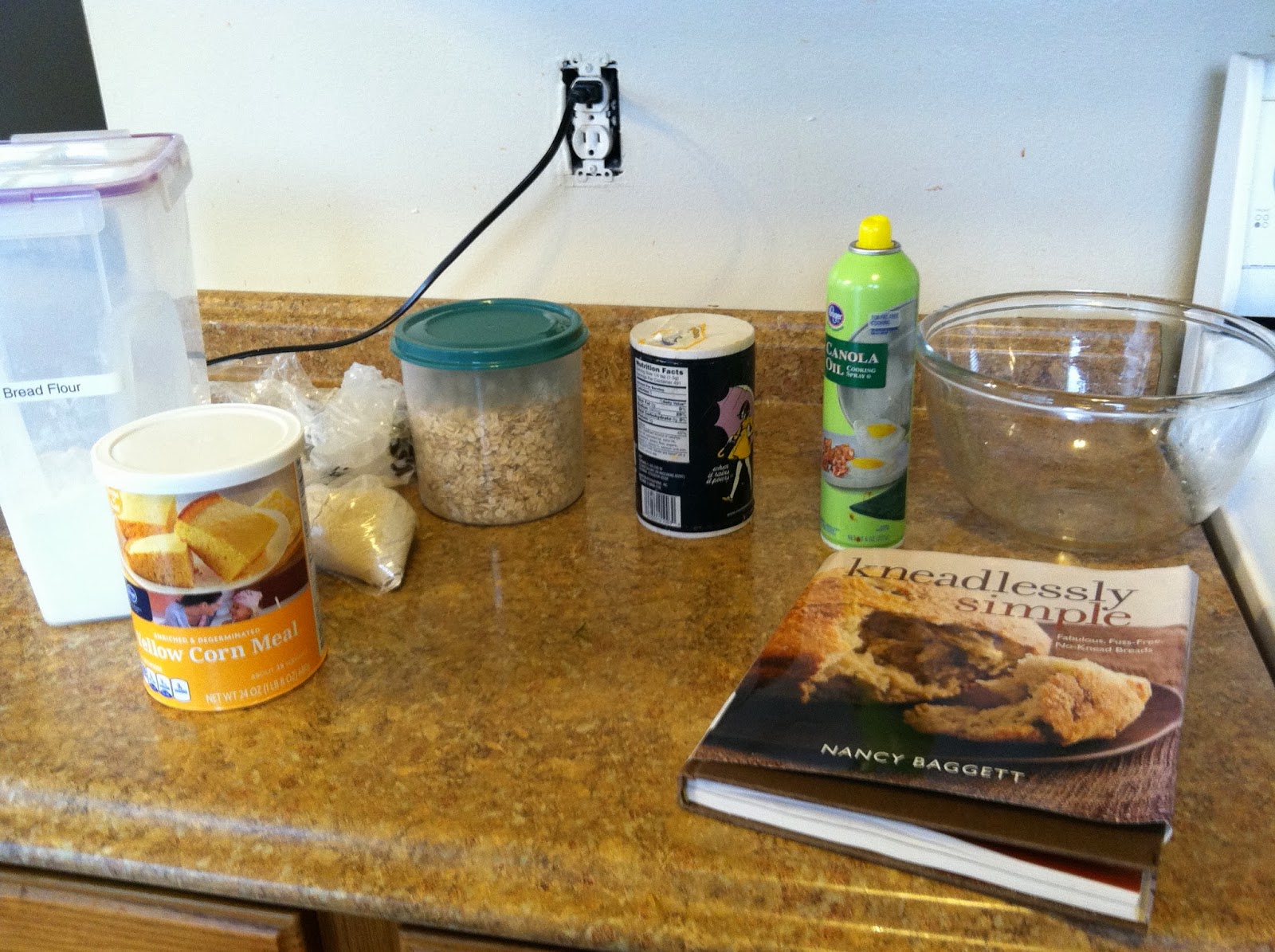 Baking like this is a lot of science, so I broke out the scale to get exact measurements--I borrowed the bread flour from my sister--if she was not out of town I'd get her to try some of the bread. Mix dry ingredients thoroughly--including the sugar and yeast--and then add the cold water. I added it slowly to try and get the dry ingredients moistened slowly, since the flour seemed to absorb as much water as it could and was kind of difficult to get all of the flour mixture moistened. The dough was, as the recipe indicated, quite stiff. The dough is sprayed with the cooking oil, covered, and stuck in the fridge for 3 to 10 hours.

The book says two rises--but there are really three in the book. First is when it rises in the fridge--which it does quite a bit, and then in a cool place for 12-18 hours, and then a regular raise in a warm place. These three rises are supposed to substitute for kneading, with the flavor developing as well. The idea is that while this takes more than 24 hours to make, most of it can be done while you sleep or at work.

Anyway, around 8 at night, I pulled the dough out of the fridge and set it on the counter top to raise. I lowered the temp in the house to a cool 66 degrees, so the bread would have a nice slow time rising. I covered it with plastic wrap and sprayed the top with oil.

In the morning the dough had doubled, and you could see an incredible array of bubbles and air pockets along the side of the bowl. I liked being able to see the dough in the clear bowl--science in action! I let it work for a few more hours, not starting the second rise until after my water aerobics.

So with an oiled rubber spatula I lifted from the corners and folded it into the center to deflate it and begin the second raise. I turned the heat back up and let that rise for two and a half hours. About twenty minutes before it was to go into the oven, I put my dutch oven in the oven and preheated both to 450. The book suggests dropping water in to make sure it is hot enough--it got sizzling!

The dough is dumped into the screaming hot pan--which is easier said than done. It turned out somewhat inelegantly in the pan and it was so hot it started cooking right away and couldn't be shifted. I used a pair of scissors to cut a circle in the top of the bread, sprinkled the top with water, and sprinkled it with cornmeal.

I lowered the temperature of the oven to 425, and the bread goes into the oven with the lid on for 50 minutes. During that time the whole house begun smelling deliciously of baking bread. At 50 minutes cooking, the lid comes off and it bakes for another 15 minutes, or until the thermometer reads between 210-212. I have to say mine didn't get quite that high, even though I let it bake the 15 minutes and then the extra 5 minutes it recommended. The top was getting really brown, and I was worried about burning it. I pulled it out and let it sit in the pot for a good 15 minutes, and then tore into it and had a big chunk with my beef and vegetable tagine.

The Verdict: This is a crusty bread with a surprisingly moist interior. I expected such a lean bread to be drier, but it is deliciously tender, with a really crunchy crust. There is a good amount of flavor developed here from the long rising and the four grains. I have to admit I want to eat this whole loaf in one sitting--but it is so good warm and delicious out of the oven. I am pretty proud of my very first loaf of bread--it is a big step above being just edible!