At last, after a month of cooking a variety of pies, here is the long awaited Pieathalon Pie swap pie recipe! I was assigned Simone's Strawberry Pie, which was simultaneously a relief and a disappointment. Having read through the archives of many a recipe swap I'd looked forward to a crazy vintage recipe combining strange ingredients in never before thought of ways. Of course, I hadn't looked forward to eating it, and this recipe produced a lovely pie that I've been happy to eat most of myself!

I will say that for a recipe that calls for Jello and a prepared pie crust this was remarkably tricky and I even used a shortcut not available when Simone wrote this recipe. Out of general squeamishness I used pasteurized egg whites since they aren't cooked in this recipe, and I had to whip up two batches to get them airy enough to fold into the egg yolk custard. I did make another change--because I'm bad at following directions, and jazzed up the pureed strawberries with some lemon zest.

The eggs were the hardest part of the whole thing--cooking the yolks over the water bath without them curdling, then getting the whites beaten up enough to fold in. I used less sugar  in the whites, because the first time I added the sugar it deflated the whites. So the second time I added half as much sugar--which was plenty.

I was a big worried about the jello--the recipe called for strawberry gelatin, but no indication of the size of packet. The package I used was pretty small, so I worried it would not set up properly. This turned out not to be a concern, as the whole thing came together very well. In fact there was extra filling, more than could fit in the graham cracker crust. I figure that maybe the crust Simone used was bigger.

The filled pie goes in the fridge to set up. I left mine in there overnight because I wasn't ready to eat it after I made it, but it set up after a couple of hours. I topped it with sliced strawberries as directed, and served it with strawberry puree and whipped cream from a can. You can probably see the texture in the picture--it was super light and airy, with a good strawberry flavor.

One thing I really liked about this recipe was that the pie held onto the water and didn't leak liquid like other pies I've made. So it was good for several days after it was made, which is nice when it is just me to eat it over the week.

I was pretty lucky with this recipe from Jenny of Silver Screen Suppers--if you want to check out some other lucky bakers trying their hands at pie construction I listed the links at the end of the post! 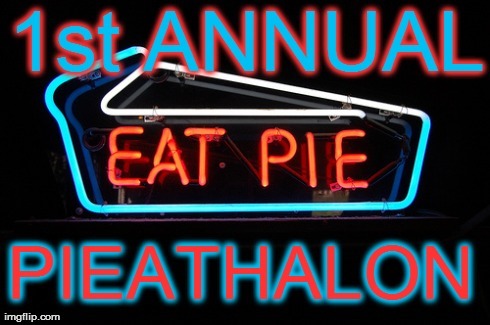