When I uploaded my cooking pictures, this one came with, and I figured it added some nice variety. My adorable niece does look surprised to be here on this blog. Butternut Squash risotto is the dish I made to go with my pork roast for my sister's birthday. My other sister is a vegetarian so this works as a side or main dish, I did substitute vegetable broth for chicken broth. This is from the Everyday Food Light cookbook I got the pork roast recipe from as well. I will say this recipe does not give a good idea of how long it will take to cook. It says one hour, but I took over an hour, almost two hours just on cooking. My sister says that my problem was that the heat was too low, but I cooked it on two different stoves so it was hard to adjust. 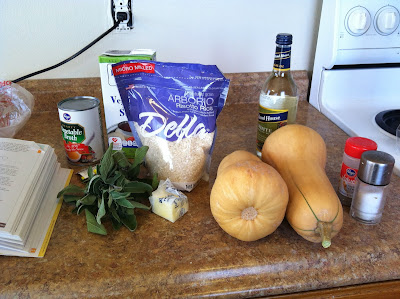 Earlier in the day, well before the party was supposed to start, I got to work on the prep--I had two butternut squashes from my work--we'd used them as fall decorations and they'd just come down after Thanksgiving. I pealed and diced both, though only used one and a half for this recipe--the rest I used in my black bean and butternut squash toastadas. Since this was early in my day of cooking, I was taking a lot of pictures. When it got hectic I took fewer pictures--harder to take pictures and stir! 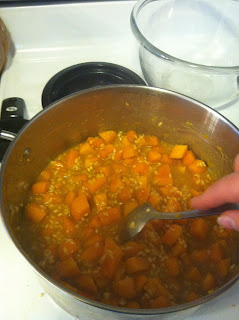 With all the prep done in advance, I was able to get right to work. In a small pan, I heated up the broth and water and set to simmer with the lid on--this is the liquid to add to the rice. I've never made risotto before, but I watch food TV so I understand the theory behind the dish. In a big pot I melted the putter and added the squash, stirring it until it had just started softening on the edges. I seasoned it with salt and pepper. Once that had started to cook, I stirred the rice in and cooked until it had taken off some of the white color and become a little translucent around the edges. I was supposed to add the wine at this point, but forgot and went straight to adding broth a half cup at a time. After each cup I added, I stirred until it absorbed most of the liquid and then repeated for a long time. I did eventually remember to add the wine, but not until later.


Midway in the cooking I moved the pans and spoon to my sisters house and continued stirring. I had to heat some water to keep adding, and the rice wasn't softening. My sister has a gas stove and I probably didn't have it high enough. Once I'd finally gotten it to a good place, my sisters helped me salt it--they added WAY more salt than I would have, but it did bring out the flavor. The grated parm was stirred in with the chopped sage, and topped with more fresh parm and sage. I didn't get a picture of the final product until after dinner--there were leftovers, but they were so good! 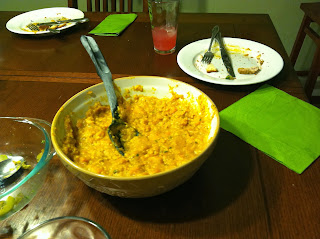 Verdict: A lot of stirring made me wonder if it was worth it--sure it was creamy, rich, and delicious, but I started at 4 and it wasn't ready until after 6. Most of that time was spent stirring. By the time the rice was done, the squash had really cooked down to a more broken down state than pictured in the book. I liked it, because it made it more creamy without adding more than the initial butter and the parm cheese. Maybe I'll try again on a higher heat and see if it takes less time. We did get my older niece to try some--she particularly liked saying the name--ri--so-T-oh.