What a Croc! Giving the slo-cooker another chance

So I love the idea of turning on the crock pot when I leave for work and coming back to dinner ready to go--but both times I've tried it the food did not turn out well. Over cooked chicken one time and bitter parsnips and overcooked chicken the second time. Blogs and books sing the praises of the crock pot--and I so want it to work. So I'm going to give it another chance--this time with chili, a dish traditionally cooked for a long time. My plan is to prepare the pot on Sunday and keep it in the fridge to put on Tuesday morning with a timer to start two hours after I leave.So it will cook only 8 and not 10 hours, and then throw the fresh veggies in before I go to a water aerobics class Tuesday night, so when I get back it will be ready!

Chili is one of those dishes where recipes are hard for me to follow--I like it spicy, with lots of veggies and beans. I'm going to use chicken, because I already have it, and black and kidney beans because that is what I have. One of my cookbooks--Robin to the Rescue--has a recipe for a crock pot chili, and while I'm not following it (it is a Cincinnati style with cinnamon and not much spice), she did mention that it could be made two days before and stored in the fridge before cooking. 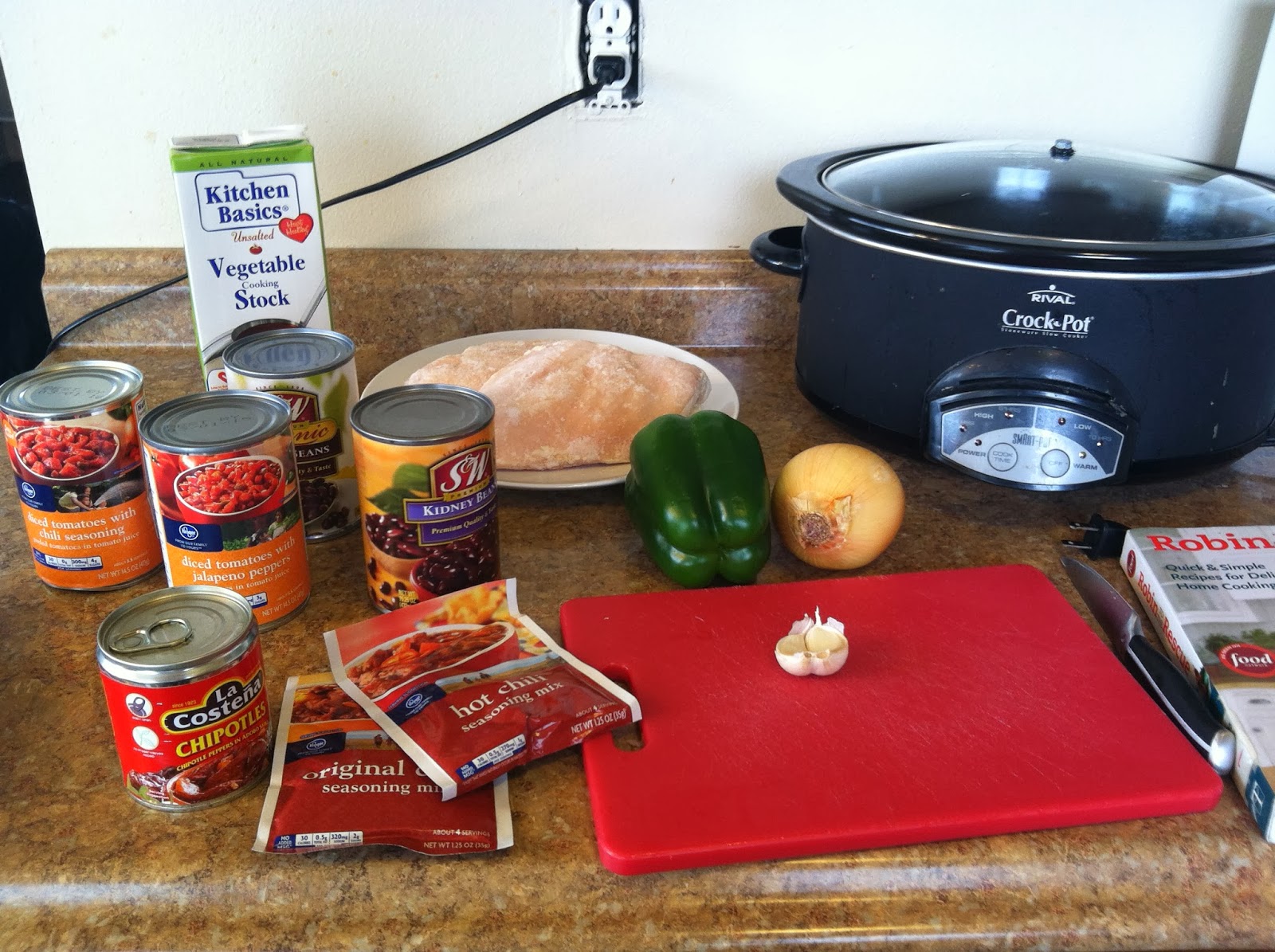 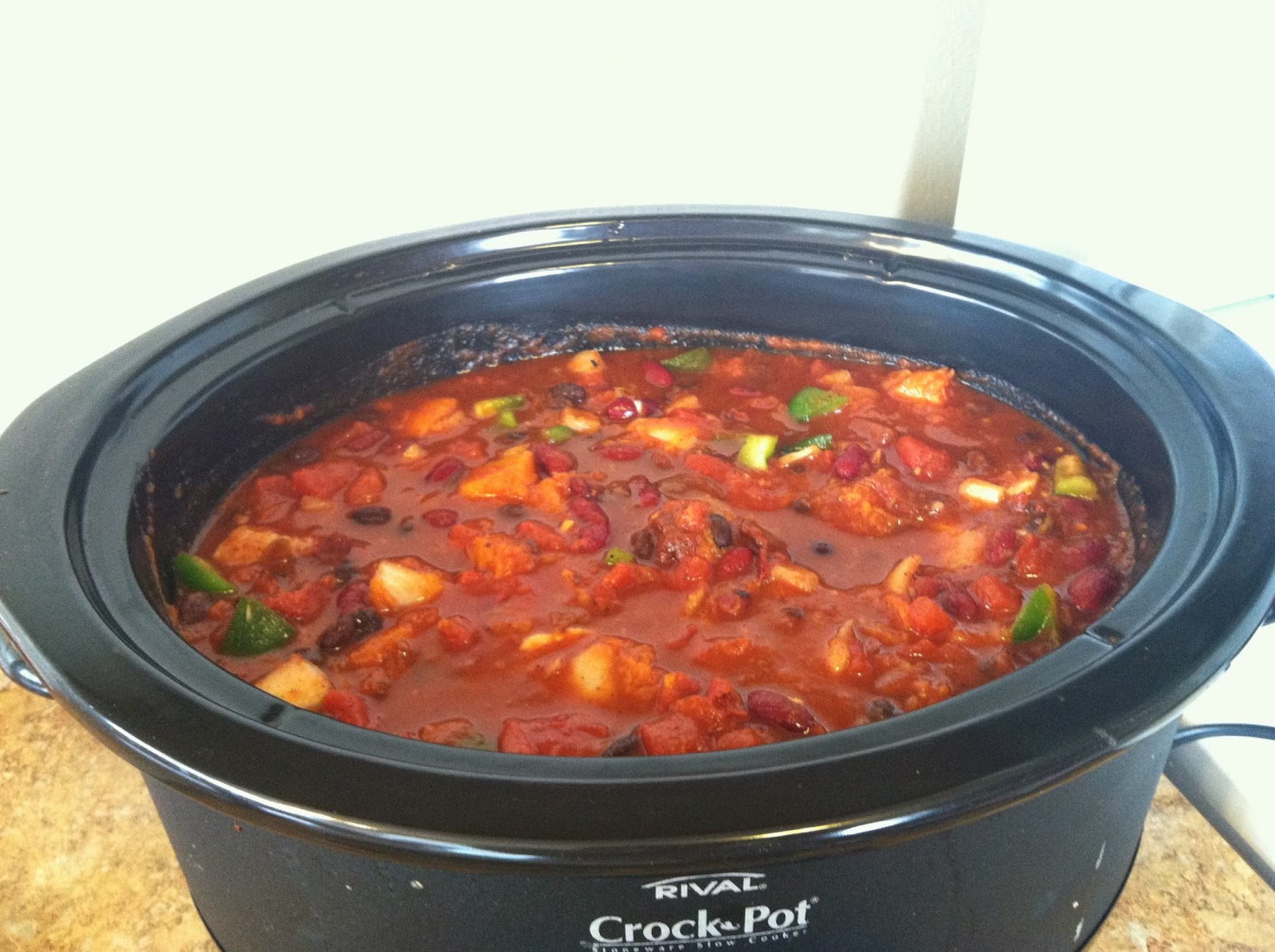 This was pretty easy to throw together--lots of cans to open and combine! I drained and rinsed the black and kidney beans, and added them and the three cans of tomatoes to my crock pot. I roughly chopped the green pepper and the onion, and tossed it in with the frozen squash. I chopped the chipolte and tossed it in as well--I have never cooked with it before so I had to try it--SPICY but smokey and yummy! I stirred in the powders and grated the garlic. The chicken was cut in large cubes and added.

Because it was so thick and my pot is so large, I added some broth and some of the drained tomato juice. This should make a TON of chili--it is a good thing I just cleaned out my freezer! I have room in there for some of this yumminess.

So this morning I pulled it out of the fridge, gave it a stir, plugged it in, set it on low for 8 hours, and left for work with some trepidation. I always think I'm going to burn my apartment down when I do this. Fortunately, when I came home some 9.5 hours later my house smelled delicious, and not like smoke (well a little like delicious smoke.) I pulled out the chicken chunks, shredded them, and stirred them back in the pot.

It smelled so good, but was a little more liquid than I would have thought after all that cooking. I guess the crock pot keeps a lot of the moisture from evaporating, and a lot of liquid must have come out of the veggies and chicken. Interestingly, I had thrown in a package of frozen chopped butternut squash, because I thought it would handle the long cooking well and add some veggies. But it cooked down and completely disappeared into the broth, but it added an important flavor component, so I'm not sad I added it.

As for toppings, I added a scoop of plain Greek yogurt, and some shredded chipolte cheddar. But I think it would be great with some cilantro, sour cream, guacamole, or even corn chips. I just wanted to dig into this chili and enjoy! 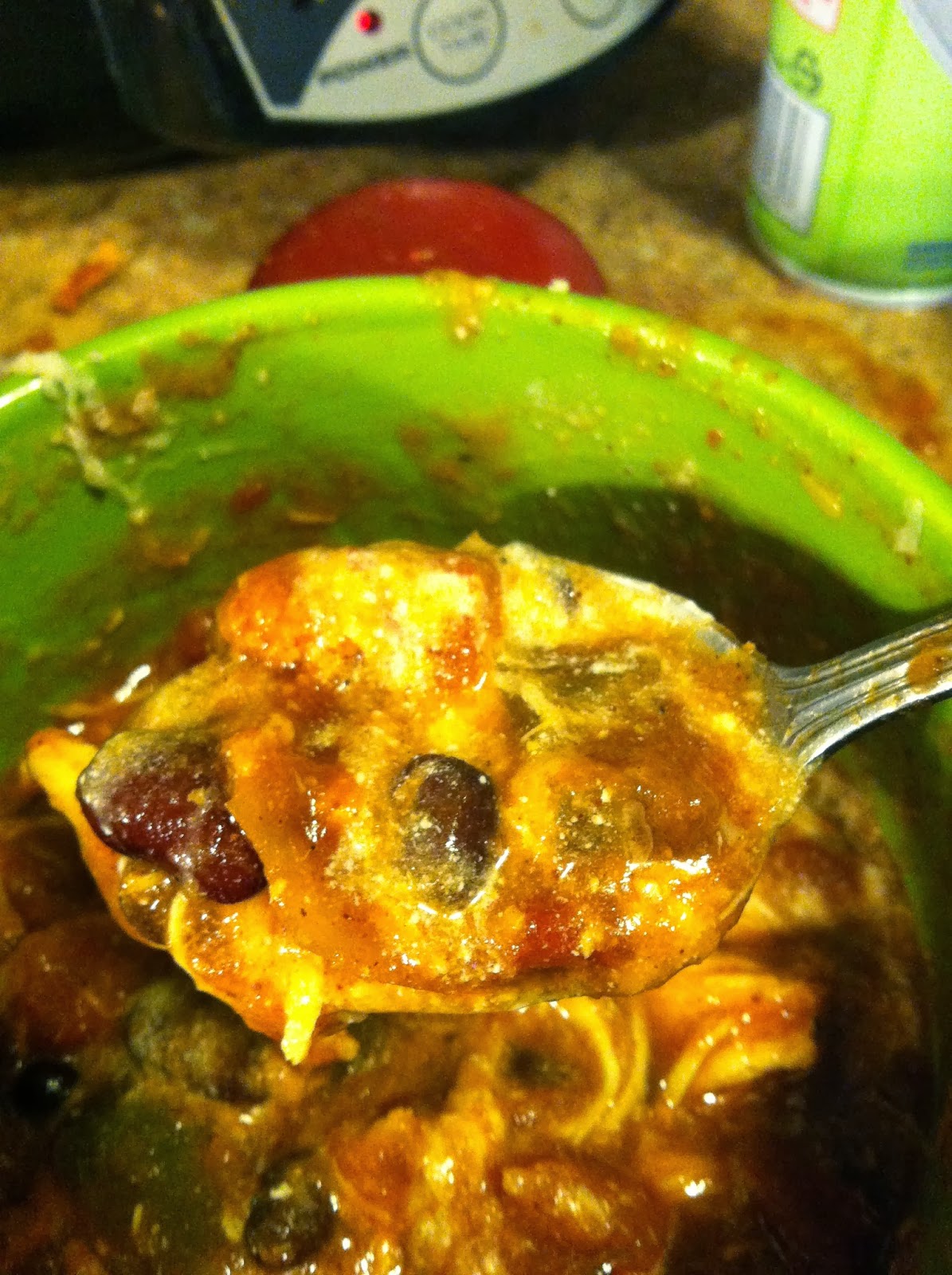 This is a definite win for the crock pot--the end result was spicy, but with smokey and sweet notes from the chipolte and butternut squash. I'd read that the long cooking muted the flavors so I added plenty of chilies, in the tomatoes, in the seasonings, and with the chipoltes. I cut the peppers and onions into pretty big pieces and was surprised at how well they held up to the cooking--I could still get some texture to them. As I noted earlier, the butternut squash flavor was not apparent, besides in some sweetness and in the texture. It made a huge batch--I'll be eating this for the next week--with some spaghetti squash, with eggs, and anything else I can think of. It should also freeze well.
Posted by Sarah at 5:46 PM