So this week our theme is second chances. We start the year with high hopes, plans, and ambitions to conquer our demons, and get our lives in order. But sometimes we fall off--things get busy, someone offers you cheesecake and a brownie (who can choose one!), and we find our plans pushed aside. Recently, I was talking to my Mom, who has recently started a healthy eating plan using Loseit--the same website I used to track my eating. She said she didn't think she could stick to it as long as I had--which I think misses the point. It isn't how long you stay on the path, but how good you are at getting back to it when you get off course. Eating healthy, or anything, isn't an all or nothing--if I spend all day eating cheetos and cheesecake, that doesn't mean I'm doomed to eat unhealthy forever.

In the spirit of giving ourselves a second chance, I'm going to give some recipes and foods another chance. I figure that just because the first time or last time I ate something it wasn't great, doesn't mean that it is always gross, or all ways to cook it are equally as gross. With food it is easy to say, after trying once, that you don't like something--though it takes many times of exposure sometimes to really explore an item.

My first effort is trying a Turkey cutlet recipe--well it is chicken in the recipe, but I had bought two packages of thin cutlets. One of which I destroyed by trying to pan fry, turning them dry and stringy. I hope that this new recipe will produce better results with the half I froze. 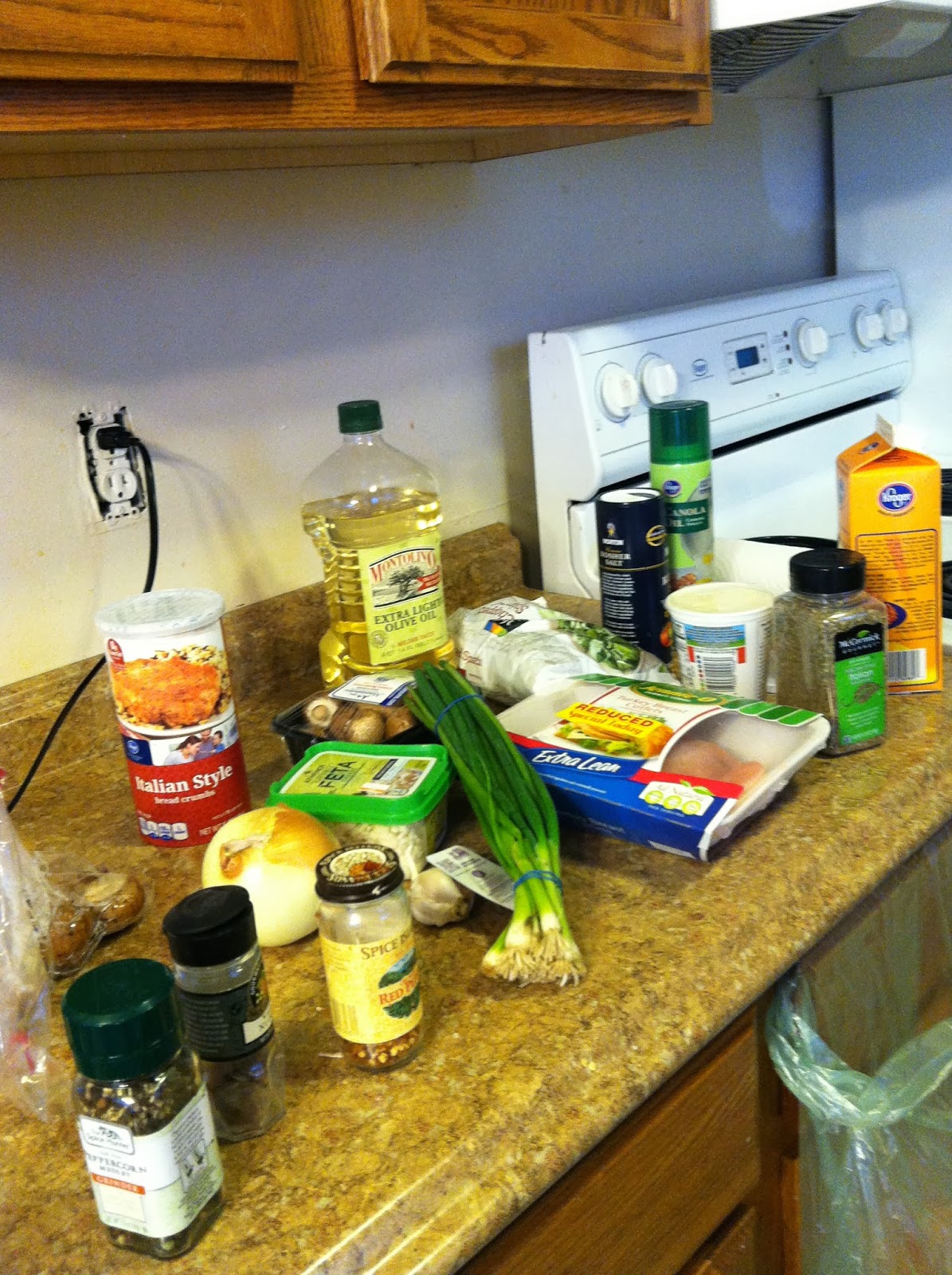 I sprayed a saute pan with cooking spray and sauteed the chopped onions, scallion, garlic, and mushrooms. While that cooked, I defrosted and drained the spinach. I added the spinach, the Italian seasonings, and cooked that for a while as I was chatting with my parents. It is hard to cook and Skype without being distracted, so sorry about that Dad!

Then I added the feta and the ricotta--along with some red pepper flakes and nutmeg. That mixed together and was set aside while I worked on the cutlets.

This is the tricky part of the recipe--preparing and wrapping the turkey to go in the oven. I had bought pre-sliced cutlets, so I merely added salt and pepper and put it between two pieces of wax paper. I then used my container of salt to roll it a little thinner so it was big enough to wrap around the stuffing. Once it was prepared, I placed 1/4 of a cup of the spinach mix in the middle and rolled the cutlet up, placing it open side down.

Once that was done the rest of the recipe was less daunting. I've never really breaded anything, but I watch a lot of Good Eats, and Alton Brown covers the breading station in more than one show! So I set it up--the rolls on one side, the egg mixture (egg, water, salt and pepper), then the crumbs, and finally the prepared pan (which I had covered with foil and sprayed with cooking spray.) So the rolls go into the egg, where they are covered, then placed in the crumbs and rolled to coat, before finishing up on the sheet pan. I finished them off with a dash of cayenne pepper and a quick spritz of cooking spray to crisp the top of the rolls. 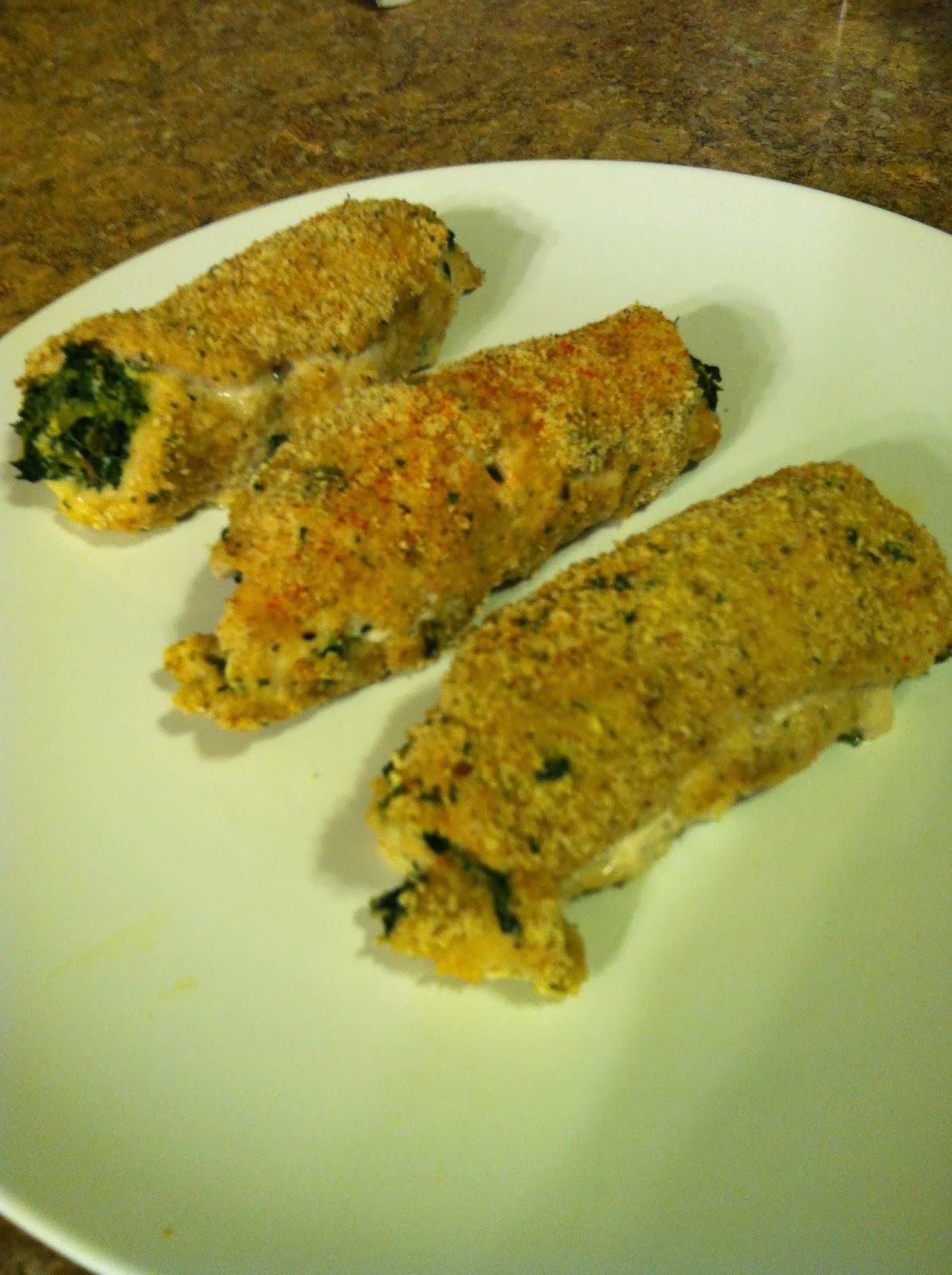 The finished rolls bake in an oven pre-heated to 350 degrees for about 25 minutes, or until cooked through. The turkey is thin so it cooks fast--check it often!

It tastes and looks like something I'd buy at the store or get at a restaurant--though it cooked maybe 2 minutes too long. If I'd pulled them out a little earlier, they may not have been quite so dry, but this was WAY better than the last time I made it--it was more tender and the stuffing kept it from really drying out. The flavor was really good--spicy, with the richness of the cheese, the freshness of the spinach, and the crunch of the outside covering. The rolls held together very well in the oven, and now that I've got the hang of the rolling I'll be making this again! I also want to explore Skinnytaste's other rolled chicken/turkey recipes! I'm very glad I gave these cutlets another try, and I served them with parsnips and carrots--my second chance for parsnips as well. I'll post about them on Wednesday.