There are so many recipes in the Glorious One-Pot Meals cookbook that I want to try, that it was hard to narrow it down to the one to try first. I settled on Chicken Marbella, because I had both Brussels sprouts and portobello mushrooms to use. The recipe calls for prunes (my sister says to call them dried plums to make it sound better) which I'm unsure of how I'll like, but the author actually says her husband shares my skepticism for fruit in savory dishes and that he liked this. So in light of trying new things, I'm going with this!

I pulled out all the ingredients, and realized that it didn't call for any garlic--which seemed like a travesty, so I pulled out the garlic to add. After setting the oven to 400, I begun chopping with the dried prunes, which I have never ever in my life tried before this. I snuck a teeny piece and it was not bad. 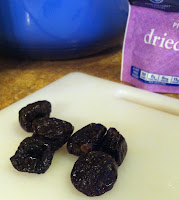 I'm very glad that I finally broke down and bought some new knives a couple of months ago--it has made all of this chopping so much easier to have sharp knives! The prunes, olives, capers, and caper juice were mixed together, and set aside while I prepared the chicken. Since my two chicken breasts were so large (quite the image!), I decided to break them down into smaller pieces to fill up more of the pan.

At that point, I got a call from the Dominican Republic--my mom is finally feeling better after having some kind of tropical fever for several weeks, and we caught up about Thanksgiving goings-on. I'm getting excited to visit them in December for Christmas! Because of the skype call, I didn't get pictures of the rest of the prep, but the prune mix went on top of the chicken. The broth, vinegar, parsley, oregano, and extra garlic and red pepper was mixed and half poured on the chicken. I sliced the potatoes and layered them on top of the chicken slices, and then cut up and layered the mushrooms, and then sliced and covered everything with Brussels sprouts. Bay leaves and the rest of the broth completed the dish, and into the oven it went to cook for 45 minutes. 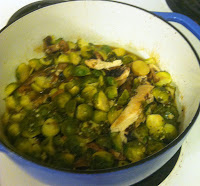 The book says it is done when you can smell it outside of the oven, and sure enough when the buzzer went off I could smell it through out the apartment. Here is the finished dish--after I'd checked the chicken was cooked through.

The Verdict: Good, but not great. Some of the chicken was overcooked, and a little dry, even though it basically poached in the liquid. The best bites were those that had the mushrooms, olives, capers, and prunes. Once again I would have liked more veggies to the amount of protein, and I wish I'd gone ahead and added the whole bag of Brussels sprouts! If I made it again, I think I'd marinate the chicken with the prune, olive, caper mix with some of the liquid before cooking, and increase the amount of veggies, and not slice the chicken into strips.
Posted by Sarah at 6:38 PM