Snowball Surprise: a recipe from the web

Baby its cold outside! And also inside--at least at my work lately. Temperatures outside have dipped to single digits overnight, with a balmy high of 20 degrees. So, naturally, our heater turned off. Apparently it shuts off when it is too cold so the freezer coils don't freeze. It still doesn't make sense to me, and I'll believe it isn't going to happen again when I walk in a heated building and don't have to spend the morning on the phone freezing demanding to know where the HVAC crew is. People are starting to assume every time I call it is about the heat--are you warm is going to replace hello soon! Anyway, it has been a cold and stressful week, where the short staffing and freezing temperatures just are no fun for anyone. So since I seem powerless over the heat, I thought I'd make cookies. And while I know I have a shelf full of cookbooks, with many, many recipes to try, hundreds of them for cookies, I saw this recipe on a blog and just had to make them!

Midcentury Menu, home of all things vintage and one of my favorite cooking blogs, posted a list of their top ten holiday cookies, and the Chocolate Filled Snowballs seemed perfect for how cold and snowy we all are at work. Interestingly, these are perhaps the most unhealthy cookies I could have made. I made a brave attempt to make them somewhat healthier, but even light butter is mostly fat. And funny story, I just realized in typing this up that I used much more butter than I was supposed to, which when you use light butter kind of defeats the purpose. Well, it probably didn't kill anyone. 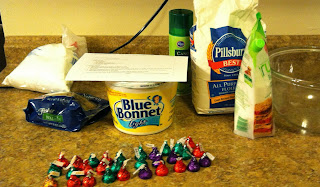 So I'm looking at these pictures and feeling like an idiot for not realizing that I had too much butter. Well, I never claimed to be a good cook--learning to cook is sort of my plan, and clearly following directions is a major problem I have! They were pretty good with all the butter, so I'd definitely make them again with the right amount of butter. So loads of butter, sugar, vanilla mixed together, then I got the walnuts out to chop. I bought them pre chopped, but they came in big chunks, and the recipe said finely chopped. Since I don't have a food processor and my knife skills are lacking I used the grinding blade on my blender.

I should have put them in the cup in small amounts, because it chopped some into more of a paste and others were still in chunks. But not bad, and faster than me cutting off my finger trying to chop them all by hand.

I added the nuts and the sifted flour to the very buttery mix of wet ingredients, and chilled it all for 45 minutes or so while I made dinner. The funny thing was that I wasn't sure I added the right amount of flour, but because the dough looked like cookie dough I figured I had--so maybe I added too much flour too! 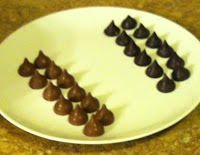 After the dough chilled, I wrapped it around various types of Hershey's kisses and baked them at 375 for about 13 minutes. They still looked uncooked, but getting browned on the bottoms so I took them out. After cooling a little I tossed them in powdered sugar. 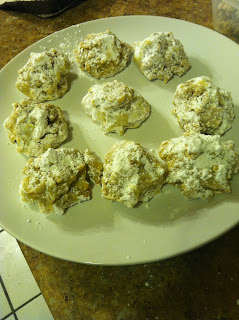 The Verdict: Even though I'm an idiot and made these wrong, they still tasted buttery and delicious. Just even more like an artery was closing off because of the richness. The caramel kisses didn't work the way I wanted, because the caramel leaked out and kind of made a mess. But I think other types of kisses would work, this time of year there are tons of different flavors. I am going to have to make these again so I can get it right next time. My apologies to the fine folks at Midcentury Menu for slaughtering their recipe, and to my coworkers for hardening their arteries. I wanted to post this still so I can look back and see how I've grown. My blog is about learning after all!
Posted by Sarah at 7:07 AM