Salmon Florentine in One Pot


Growing up, I was never good at eating my fruits and veggies--in fact until this past year there were a whole bunch of veggies I was completely convinced were inedible. This might be because the typical vegetable side dish we had as a kid was a can of corn or a bag of frozen peas (I even have a vegetarian sister) or green beans in tater-tot casserole (pretty good actually). The strange thing is that my Dad LOVES all kinds of vegetables, and sometimes would cook some for himself, even though no one else would eat any. I guess this next dish is in his honor, since it features two foods I mostly associate with him: cooked spinach and salmon, and the fact that I'm making it in a Dutch Oven means it pretty much should be named after him.

So here is my second recipe from Glorious One Pot Meals, Salmon Florentine ala Bill. Though my Dad has made me salmon in probably 100 different ways, I'm not sure he's made this way. Maybe he will try it if it turns out well!

This is a really easy dish to make, and uses relatively few ingredients. I tossed it together in five minutes or so--I think unwrapping the salmon was the most time consuming part. So you spray your glorious pot with cooking spray, and add a thick layer of spinach (I used a spinach/baby kale mix from walmart). I increased the seasonings from the book, because I thought the ingredients sounded a little bland. So I put the salmon on top of the spinach mix, and sprayed it with cooking spray and liberally seasoned with salt, pepper, Italian seasoning, and red pepper. 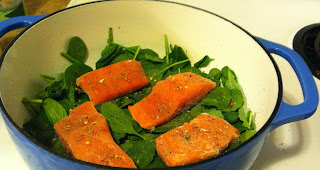 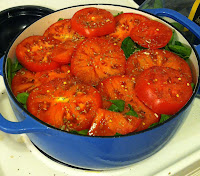 Next I sliced the lemon super thin and pealed the garlic. That went in a layer over the salmon and spinach. I have a bigger pot than is called for in the directions so it didn't cover the whole layer, and I placed the garlic on the fillets under the lemons.

This deliciousness is covered by another layer of spinach, which is then covered with thickly sliced tomatoes. I bought WAY too many tomatoes, because the recipe said 5-6 so that is what I got. But I purchased huge beefsteak tomatoes, which were delicious, but enormous. I only used 4, and ate some with salt and pepper without cooking. I seasoned the tomatoes as well, and stuffed some extra spinach in so it was as full as I could get. Then sprayed the lid with oil, covered it, and stuck it in a 450 degree oven for 40 minutes. The fillets were frozen, but this seemed like a long time even so. However, it was perfect when I took it out! 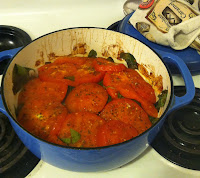 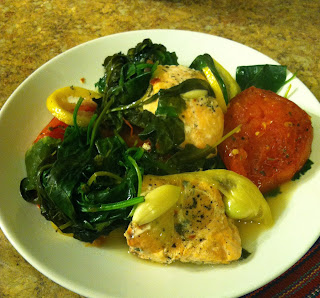 The spinach had shrunk to half the size as it cooked, but it was deliciously fragrant and fresh! The bigger tomatoes were a good choice because they really held up to the cooking process.

The Verdict: This is the best thing I've made in a long time. I didn't want to stop eating it, even after I was full. The tomatoes were fall apart delicious, the spinach was lemony, and the salmon tender. There was something delightfully fresh and simple about this dish, though I really wanted more spinach to salmon (which I'm noticing is my complaint about every dish I make!) Next time I might try with a white fish--I have some hake in the freezer that would be good--lower calorie as well!
Posted by Sarah at 6:34 PM