We've spent several chilly days at work, and some of my coworkers remarked that their favorite meal for a chilly day was tomato soup and grilled cheese sandwiches. So when we were planning a major overhaul of our computer systems, I offered to bring in some for lunch for everyone. Originally I'd planned on buying some canned soup, because I've never made tomato soup before, but with my culinary adventures on this blog, I thought I'd try making it. Well, it almost killed me, and is the most complicated dish I've ever made, mostly because I insisted on following the recipe exactly. Next time I'll either make substitutions or get a simpler recipe.
Ingredients:
3 large shallots (about 3/4 of a cup) 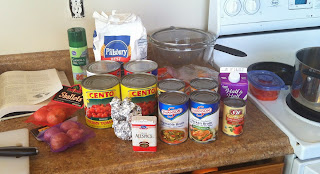 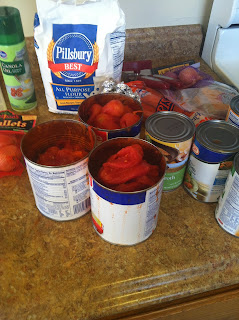 I thought I had bought everything for this recipe, but then I got back and looked at the recipe and saw it only served 4! I've never seen a soup that required so many ingredients and served so few people. So I needed to double it, but I didn't have enough tomatoes--so out I went in the middle of a snow storm to buy more. Fortunately I bought a lot more than what I'd need to double it, because it turns out I'd made a mistake earlier. The whole tomatoes I'd bought originally were cherry tomatoes--too small and full of seeds to use! The cookbook specifically instructs you to take the whole tomatoes and squeeze out the juice and seeds, discard them, and just use the shells of the tomatoes. It was a blood bath--like a scene from Dexter, with tomato casualties piling up everywhere.

Once that gristly task was complete, I turned to chopping the shallots--7 of them into teeny tiny pieces. The carrots were easier--the recipe says one carrot, but my carrots were pretty small so I did 3 for my double batch. Looking back I wonder why I chopped them so fine--this is a pureed soup-- it all goes in a blender at the end. But this book is kind of like a drill Sargent--you try to do what it says exactly how it says because through out the recipes is this unshakable belief that they have figured out the best/only way to do it and to venture off is to fail!

Once that was done I discovered the next problem--the tomato paste! I thought I had several cans in the pantry, and I did--only they expired almost three years ago. When I opened one it was black and stinky--disgusting, and unusable. This was sadly after I had already ventured out in the snow, and my sister wasn't answering her phone to see if I could borrow some. So I used the internet and found a recipe for making tomato paste from tomato sauce, which I had. It isn't hard: one can of tomato sauce, a small saucepan, and 7 to 14 minutes of cooking. It took a lot longer than I thought it would to reduce to a paste consistency, and my sister called right after I finished it, with paste I could borrow. I used my homemade paste, since I went to so much effort! 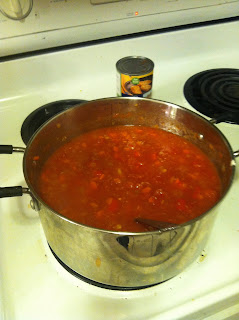 So more than an hour into this soup and I finally get to start cooking! In my large pot I put in some oil, heated it over medium heat, and added the shallots, carrots, and the homemade tomato paste. That cooked until the carrot was soft, and shallots translucent. I added the drained and seeded tomatoes to the pot and the sugar--and cooked until they were dry. Well, that is what the recipe said--but I'm not really clear on what that meant. Lots of stirring later, lots and lots, and I decided it was as dry as it was going to get and added the flour. That cooked for a minute and I added the broths a little at a time, bringing it up to a boil and then reducing to simmer for 10 minutes.

I used my new immersion blender to purify it, which was nice because it was hot and putting into a blender would have been another mess I didn't need. Once it was pureed, I added the half and half and let it cook some more. The directions say to season at this point, salt and pepper and cayenne to taste.

The Verdict: The soup was delicious, though my blender did not get as smooth of a texture as I'm used to--so you could still tell there were carrots in there. It wasn't as strong of a tomato taste as I would have thought--less traditional, and more veggie strong. But the question I ask myself is: Is the amount of effort worth the result? It was popular at work--several staff member said it was their favorite of all the soups I've made. But it took me almost 3 hours to make--my knees hurt so badly after making it that my physical therapist told me I'd need to wear braces if I wanted to make it again (well, really that if I was going to cook all day, I should put my braces on). So if I do make it again, I will be modifying the recipe to be simpler, or I'll try a different tomato soup recipe altogether!
Posted by Sarah at 3:53 PM