So I selected two options from my Quinoa 365 cookbook, one is a main dish and one is a dessert. I figured if I was cooking Quinoa I might as well use it twice! And I wanted to expand my horizons--I've never had quinoa in anything but savory dishes.

Here are my two recipes from the book: Thai Cashew Chicken and Broccoli on Quinoa, and Raspberry Cream Cheese Muffins. 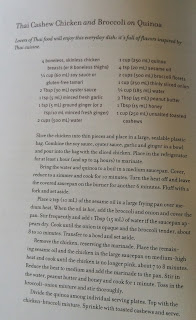 I took these photos of the recipes to the store so I would get everything I needed, and I still ended up with no whole wheat flour, no baking soda, and no cashews. I borrowed the first two from my sister, in exchange for muffins! The second just didn't happen. So it is just Thai Chicken and Broccoli, no cashews.

I cooked quinoa just last week, but I usually cook it in the sauce, so it absorbs the flavor and everything cooks at once. So I was worried about getting the liquid ratio right--when the timer went off it had bloomed, but was still sloshy. Fortunately, a little more cooking, a lot of time sitting, and some fluffing and it turned out the right consistency. 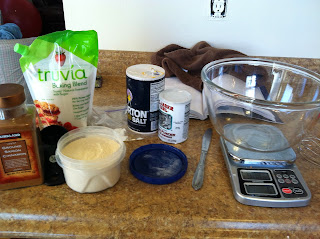 While the quinoa cooled and absorbed liquid, I got out the ingredients for the muffins. When I borrowed the flour from my sister she was all fancy with her food scale, and I wanted to do the same, but the amounts in the book were confusing. Sadly math is hard, so I got my measuring cup out and went to work. Dry ingredients in the bowl, I turned to the main dish.


I buy chicken in 20 lbs bags from Costco, so I knew I'd have enough for this recipe. It calls for 4 chicken breasts, but the one I pulled out of my monster bag was almost 13 oz, which I figured was equal.

The marinade was so flavorful and easy--I thinly sliced this monster breast, and set it all in the fridge to work its magic.

The quinoa had cooled, so in it went into the dry ingredients, where it formed funny little balls. The cream cheese was more of the same. I struggled with the raspberries--the frozen ones I bought were monster sized (and not even from Costco!). But I moved on to wet ingredients, where I sadly used mostly substitutions to make them lighter. Egg substitute, apple sauce, and a sweetener blend, pretty much only the vanilla was as called for in the recipe.

I found the chicken dish to be easier to follow the recipe, (though I must admit that besides forgetting the cashews, I added less peanut butter and honey at the end). Broccoli and onion chopped, I fried them up with some sesame oil. Then the chicken into the pan. It had been marinating for hours by this point (in between cooking the muffins and finishing the chicken I went and played with my nieces) so it was pretty brown. It made it sort of hard to see when it was cooked all the way through, but since it was so thinly sliced it cooked fast!  I added a touch of peanut butter, a drop of honey, and tossed it together with the broccoli. Yummy, even without cashews!

The Verdict: The chicken dish had great flavors, but the ratio of broccoli to chicken didn't work for me. In fact, I took the leftovers and added two more cups of broccoli, some mushrooms, and left off the quinoa all together. That is a dish I'd make again!

I brought over some warm muffins to my sister when I went to play with my nieces, her response: "tastes healthy" and "maybe you need better recipes." I actually enjoyed them--they are filling and yes, healthy. Maybe if I hadn't done all the substitutions they would have been more than healthy.