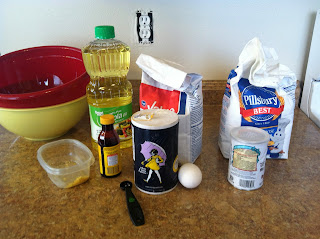 Merry Christmas! I'm off in the Dominican Republic enjoying the sand, sun, and surf, but I've scheduled posts through the week. I've done so much baking this last month, it will take me through next month to post them all!

For my second batch of sugar cookies, I returned to Mid-Century Menu's list of 10 vintage cookies, selecting their Frosted Lemon Sugar Cookie recipe. This went a lot better than when I tried the last recipe, mostly because I followed the recipe. Since I had just made some sugar cookies, I did a half batch of these. The other change I made was that I frosted them with royal icing instead of the frosting on the recipe--easier for transit and decorating. One thing I really liked about this recipe is that it didn't require anything I don't normally have on hand--like tons of butter!
Ingredients: 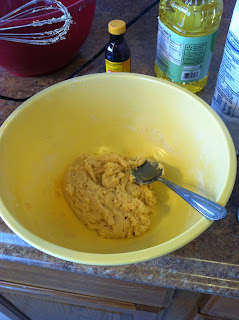 Since this recipe uses oil instead of butter, it mixes together a lot easier. First mix sugar, eggs, oil, lemon rind, and vanilla in one bowl. In a second bowl sift together the flour, baking powder and salt. Add the flour mix a little at a time to the egg mixture.

The recipe says it will be a soft dough, which is natural since it uses oil and not butter. I had originally intended to make this dough ahead and cook it later, so I wrapped it up and put it in the fridge. After checking on the other dough that I had made the day before, which was hard as a rock, I decided to cook them that day and store the cooked cookies instead.

So the original recipe is for a drop cookie, pressed flat with a sugar coated cup, but I rolled it out and cut it with a water glass.

These bake in 400 degree oven for 8-10 minutes. They puffed up, but didn't spread much--which was nice because all of the cookies ended up the same size.

I would love to try the frosting included in the recipe some day, but royal icing is better for transit and decorating. Next time I might add some lemon zest to the royal icing, and I would absolutely do the pipping with a royal icing in a contrasting color. I managed to smear my aliens a couple of times, once right after taking this picture, and then on the way to work. 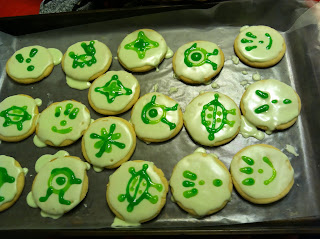 The Verdict: This is the sugar cookie for me--soft and flavorful, such a tender texture. I will be making these again for my family cookie decorating party. The dough did not become overworked as easily as the other cookies I made, so they are better for shaping cookies. Next time I will add a little more lemon zest to some of them, and I may try some almond extract for some.
Posted by Sarah at 6:28 PM