One of my all time favorite Christmas cookies is the sugar cookie, but I've had mixed luck with making them. I prefer a soft cookie, not a crispy or crunchy one. So when I volunteered to make cookies for a cousins' party I knew I would have to find a recipe that would work and not embarrass myself by bringing. Since the party is in a couple of weeks, I figured I'd test them on my coworkers and hopefully and redeem my cookie making skills after my last disaster!

So I'm making two different recipes to see which will work--if neither do I'll have to keep trying! I picked one from my America's Test Kitchen Light cookbook (one I actually already owned, and didn't get at the library,) and one from Midcentury Menu. I figure after I killed the snowball cookies, I need to do one right. Plus both recipes are for a lemon sugar cookie, one of my favorite flavors! 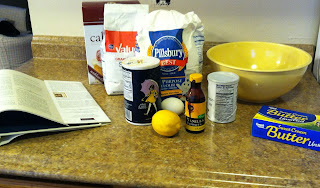 
If you've ever read anything put out by America's Test Kitchen, you'll know that they are very particular about the way their recipes are followed. They do not encourage experimentation, since they've already done all of the testing to figure out what they believe is best. Plus, as we all know, my weakness is when I don't follow the recipe exactly--so this time I was determined to do exactly as it says. I even had four different people at WalMart help me find cake flour--five if you count my sister who I called on the phone to ask about cake flour, and my other sister who tracked me down when they found it and I'd wandered off to look for butter. 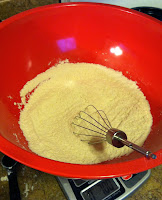 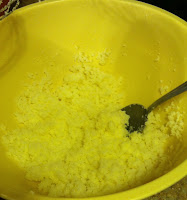 First whisk the dry ingredients together--flours, baking powder, and salt. Next cream a cup of sugar with the butter--I struggled with this step. The opposite of my last cookie making problem, there was a lot of sugar to butter ratio. Also, I broke the beater attachments to my beater a while ago, so I just have a whisk and dough hook. The directions say to beat it for 3-5 minutes until light and fluffy. I'm not sure what that looks like. But I whisked and stirred the butter and sugar and then added an egg, lightly beaten with 2 teaspoons of lemon zest and one teaspoon of vanilla. Turns out the recipe called for a tablespoon of vanilla, but since I added the lemon zest (which was a suggested alternative) I figure it is ok that I didn't get the right amount in. Though the less liquid might explain why the dough was a little crumbly. 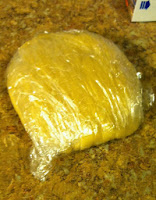 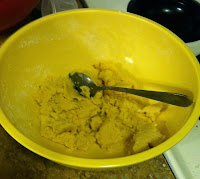 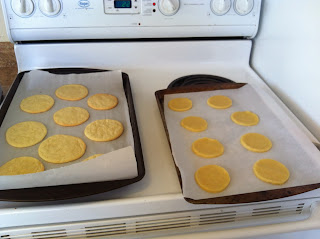 I wrapped the dough up and refrigerated it for a day, let it come to room temperature and then rolled it out. Since these were supposed to be alien cookies, I couldn't use my one cookie cutter, instead using a glass to make circles. The cookies baked at 345 for 8 minutes. They all should have been the same size, but this first batch was very inconsistent. On the first tray the cookies spread out and were thin and large, but as I continued to roll out and shape and cut the scraps the dough became overworked and they didn't spread as much. It was interesting to see how different the first cookies from this batch were from the last ones. 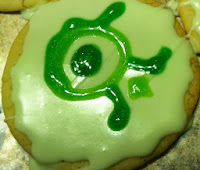 I frosted the cookies with a very simple royal icing I found in one of my books, a standard recipe that I had all of the ingredients on hand. Basically, 2 egg whites, 3 cups of powdered sugar, 2 teaspoons lemon juice, and a little green and yellow food coloring. They were all frosted and when the royal icing hardened, I drew aliens on them with a bottle of sparkly icing.

The Verdict: This is a temperamental cookie and it probably would be really different if I hadn't refrigerated the dough. When the cookies first came out of the oven, they were chewy and almost crispy, with some having a clearly overworked texture. However, after being stored overnight with the other cookies I made (which were softer) they softened, and after being iced they were even softer still. So when they were served, several days after they were cooked, they tasted better than right after they were pulled out of the oven. Also, even though they are a "light" cookie, they are not really that much more healthy than other sugar cookies. This might be a good cookie for those who prefer a crispy or chewy sugar cookie, but I am a soft or cakey cookie girl!
Posted by Sarah at 6:55 PM