Recipe from the Web--Swedish Meatballs

We were talking about foods to nibble on for our Polaris Party and meatballs came up as a great option, which I offered to bring. I was going to buy them, but figured it was a good opportunity to try making them! I've never made meatballs before in my life--my Dad buys bags of them frozen and put them in a mix of grape jelly and chili sauce. I looked in my cookbooks for a recipe that would work, and couldn't settle on one that I wanted to try. It wasn't until I was looking through the archives of one of my favorite blogs, Skinnytaste, that I found a recipe that sounded good. 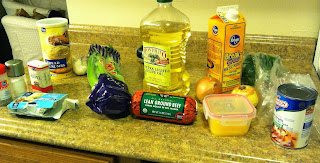 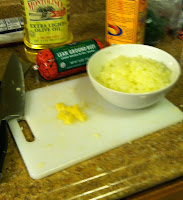 I decided to cook a double batch of the meatballs, so I would have enough for the party and for me to try some. Plus they freeze well and can be used in lots of things. I chopped two onions as finely as I could, then used my microplane to grate about 3 cloves of garlic.Chopping things is a skill I'm still developing, and sometimes they are not equally sized. My older sister told me that practice would help me perfect my technique. Onions are not too challenging, but garlic cloves are so small that I prefer if it needs to be fine to use the microplane. The two were sauteed until tender, and then two stalks of celery and a half a cup of parsley chopped fine were added and cooked a few more minutes. 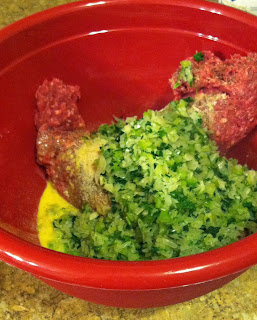 The sauteed vegetables cooled for a few minutes while I pulled together the other ingredients. Two pounds of 94% lean beef, 1/2 cup bread crumbs, 1/4 cup plus 2 tablespoons egg substitute and one egg yolk I had after using the whites for another recipe. I also added 2 tsps allspice, and a lot of salt and pepper. The directions said salt and pepper to taste, but I'm not sure how one can test the seasoning of an uncooked meatball. So I added a bunch and hoped for the best!

Next came the fun part--the veggies were added and I mixed it all together with my hands. I have to admit, as gross as it was, it was also kind of fun--like playing with play doh! I used a 1/4 cup and divided it into two meatballs. I wasn't sure how compressed they should be--so I didn't try too hard, just rolled them in my hands. I placed them on a cookie sheet and froze all but 4 of them.

I cooked those 4 on my George Foreman grill and ate them on toast, yummy! The rest were defrosted and cooked in beef broth--which was drained and mixed with cream cheese and some roasted garlic and loads of salt and pepper to make a sauce. I topped it with some chopped parsley and served them to an appreciative work crowd! Sadly, I didn't snap any pictures, but they looked a lot like Ikea meatballs.

The Verdict: Great flavor and texture, they are a definite make again. If I had to change one thing, I would make the meatballs smaller, particularly for an appetizer type setting. They froze well and were just as great defrosted. We actually ate all of them at the party, so I will have to make them again. I think they'd be good with spinach cooked in the sauce, or with spaghetti squash.
Posted by Sarah at 8:33 AM