Prior to this past week, I had 5 cookbooks, if you count the nifty Jello pamphlet that has a spinning wheel of Jello salad options to go with every type of protein (which I totally count, it is pretty awesome). Weeks ago I had gone through my library's cookbooks and withdrawn titles that had not checked out in years, were damaged, or falling apart. I'll be reordering the popular titles, and adding new titles on popular topics, but cookbooks wear out fast, and some titles come and go in popularity (I'm super excited about the Star Trek cookbook from the mid 1990s). 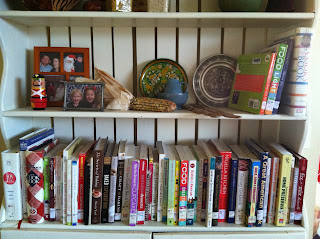 In honor of Thanksgiving, we pulled all the old cookbooks out to sale--and once they were out for the public to view, I could vie with everyone else to buy as much as I could afford. I bought a lot of books, around 45! I just couldn't resist, and every time I walked past the sale shelves I found another title or 5 to add to my pile. There were probably 200+ that I withdrew, some were too gross to sell, and a lot were picked up by the public and other staff at the library.

So I'm going to try to cook at least one recipe from each cookbook I own--even the ones I had before that I've never cooked from. I can already tell some of the cookbooks I will return to and cook more than one recipe from, while others I may not hang onto.

My one worry is that I'll regain 500 million pounds with all the new cooking, so my coworkers have volunteered to eat any baking projects, and I will continue to make substitutions to make things healthier! Here is to more cooking in 2014!

Email ThisBlogThis!Share to TwitterShare to FacebookShare to Pinterest
Labels: cookbooks